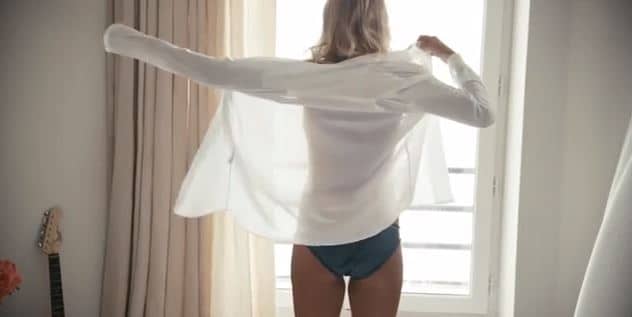 Making head waves is Australian surf and swimwear maker Roxy who’s latest promotional video for its upcoming Biarritz, France surfing competition has critics up in arms. Why? Cause no one really cares about the surfing feats of the women being championed but rather their perky titties and ass. Which just might be another way of saying that’s what in the end really matters when it comes to being a woman or is it?

The video itself is a scintillating expose of one female surfer as she gets up in the morning and proceeds ever slowly with her ass pertness ever present to get down to the beach. Interestingly never once does the viewer get to see the surfer’s face nor their athletic achievements which Roxy is supposedly championing along with their scanty swimwear.

In Roxy’s defense, the surfwear maker claims the video was simply an attempt to get viewers to guess the swimmer’s identity.

In defense of the video, a statement on the Roxy’s Facebook page reads, “Obviously, there’s been much conversation around the video we recently released. We believe all athletes are naturally beautiful, in and out of the water. You certainly don’t have to be sexy to be an athlete, & we also believe it’s not wrong to be an athlete and to be sexy, if you choose to be. We don’t judge one to be better than the other and we don’t believe in excluding one for the other.”

But not everyone sees it that way, told Australia’s Macquarie University Professor and advisor to the Australian Sports Commission Catharine Lumby: “There is nothing wrong with celebrating fit athletic bodies, I’m all for it, but this goes way beyond. It is really just very voyeuristic.”

The Australian Sports Commission went on to offer the following: “The ASC considers it has a responsibility to ensure that images of female athletes are positive and are not sexualised. We discourage promotional activities that lead to female athletes being exploited.”

Which poses the question, is this a blatant sexualization of female surfers or the celebration of the beautiful? Cause isn’t that what we all imagine when we think about female accomplishments? How beautiful they looked doing it…?