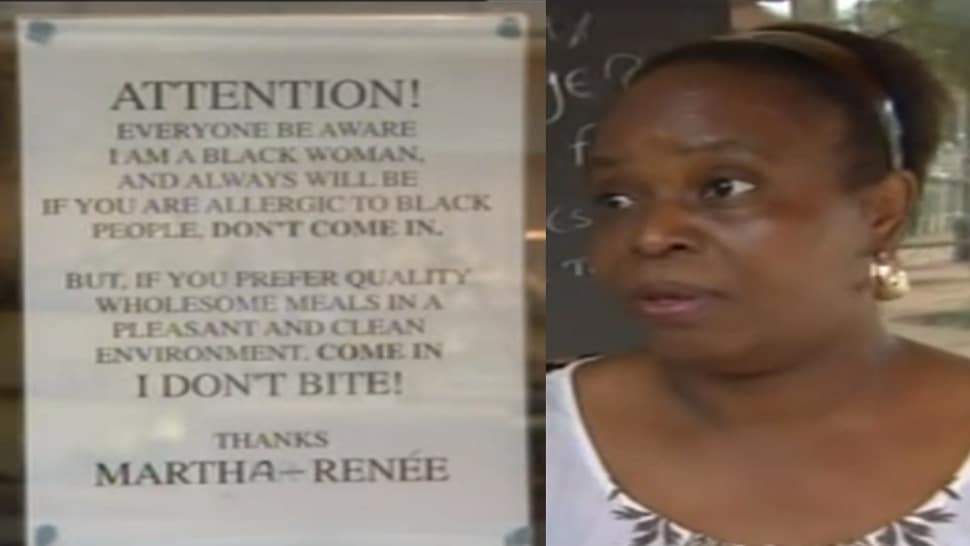 Martha-Renee Kolleh, a black mother-of-three who who happens to run Yeanon Café in the West Yorkshire (England) market town of Ossett has decided it has come high time to take a stand against the predominant racism she reckons she’s had to endure for the past two years. Yes that’s right, Martha has gone and posted a sign on the door of her establishment which straight out informs all you potential customers that her ass is black.

Exclaims the all cap sign: “Attention!, everyone be aware I am a black woman, and always will be[.] If you are allergic to black people, don’t come in.”

According to Martha-Renee Kolleh, she felt compelled to erect the sign on account of customers regularly walking and walking back out once they figure out her ass was black.

Of interesting note, Ossett’s census figures show that out of 16,116 people, some 97.5% are white. Which may or may not validate Martha’s claims of prevalent racism.

Reiterated Martha-Renee Kolleh: “I put [the sign] there because of the way people treat me in Ossett.”

According to Martha, things have gotten so bad that the cafe, where she has been serving “quality wholesome” Afro-Caribbean barbecue meals, her joint is now on the verge of closing, and if things don’t improve by autumn Martha reckons she’ll have to close down her operation.

Told Martha-Renee Kolleh to BBC news: “I hired a white woman called Tracey. When Tracey is in the cafe she does well and people will come in and it will be full, once I stay in the background. But if Tracey is not working and I’m working nobody comes in.”

Of course one wonders if it’s an issue of townspeople not particularly liking Martha to begin with irrespective of her color or whether perhaps her staunch approach to reminding potential diners that she is black which has turned off customers. Then again one supposes if her cafe is busy when she is not there it could suggest that cafe goers really don’t care if Martha is black or white as long as the food she serves is good. Which one supposes it is on account of the fact that Martha notes her joint is packed when she is not there, an interesting feat considering that her menu ware leans on food which typically has been the domain of Afrocentric clientele.

Local Labor councillor Tony Richardson, has since offered that they are “utterly appalled” by Martha’s sign and “shocked” at the allegations of racism. Nevertheless the councillor has offered Martha his “full support” and said if racism did exist, “we have to crush it with everything we have got.”

Meanwhile, the Yeanon Café Facebook page has been overrun with messages of support from people who have seen or heard of Martha’s sign. “I just read the news report about your sign,” wrote one user. “My reaction is unprintable.”