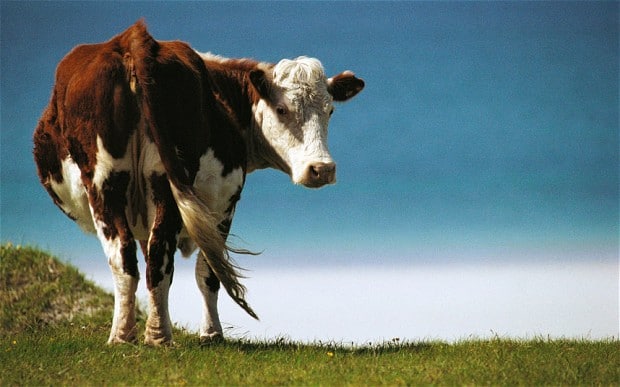 A Brazilian man, Joao Maria de Souza has had the misfortune of being killed by a cow after it fell through the roof of his bedroom while he was sleeping.

It happened whilst, Joao Maria de Souza and his wife were in bed sleeping when the 3000 pound animal incredulously crashed through the roof of his unassuming house.

Apparently the cow is said to have escaped from a nearby farm, subsequently walked onto the roof which abuts a steep hillside. From there, unable to support the load, the roof caved in, at which point the cow fell 8 feet onto de Souza’s side of the bed.

While de Souza’s wife and the animal were fine, de Souza suffered a fractured leg and was taken to the hospital. After spending several hours at the hospital, the 45-year-old Brazilian passed away, likely a result of internal bleeding.

“Being crushed by a cow in your bed is the last way you expect to leave this earth,” de Souza’s brother told Hoje em Dia, a Brazilian newspaper, in a translation provided by the Telegraph. “But in my view it wasn’t the cow that killed our Joao, it was the unacceptable time he spent waiting to be examined.”

Contacted by SuperCanal, a Brazilian TV station, the hospital went on to deny any wrongdoing maintaining instead that de Souza received adequate care.

According to the Daily Mail, De Souza’s mother, Maria, told SuperCanal: “I didn’t bring my son up to be killed by a falling cow. He nearly died when he was two and got meningitis, but I worked hard to buy medicines for him and he survived.”

“And now he’s lying in his bed and gets crushed to death by a cow. There’s no justice in the world.”

Per Hoje em Dia, the owner of the cow has yet to be identified, but may face charges related to de Souza’s death.

Because the world is indeed a shitty and misbegotten place to live in after all….or is it?