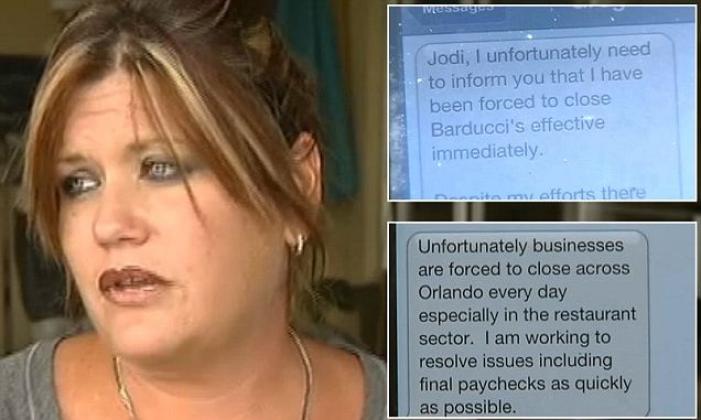 One would imagine that every lover, friend, close associate and while we’re at it, work colleague, employee deserves the respect of being told in person when things are not working out. That though was not the case for restaurant owner, Gregory Kennedy who recently took to firing his entire staff via text.

Gregory Kennedy, the proprietor of Winter Park, Florida‘s Barducci Italian Bistro recently decided rather than telling staff in person that he was forced to close down his operation he’d simply break the news by texting them. Text them because he probably didn’t want to have to deal with employees’ concerns about when they’d ever see their owed paychecks.

Told one employee, Jodi Jackson who’d worked for Gregory Kennedy as a cook just on two years when she found out on the fourth of July that she was shit out of luck:

Told the text that she and twelve other employees had received from Gregory Kennedy:

“I unfortunately need to inform you that I have been forced to close Barducci’s effective immediately.”

Kids, talking of immediately, can anything really be more immediate than dissing someone with nothing but a short brutal text? You would think a curt phone call, even an email would lessened the dull pain of being let go. But a straight up one liner that reduces one to being outright dumbfounded?

Who’s also complaining are the customers.

Told one restaurant customer, Lauren Bartolome who recently acquired a groupon for Balducci’s having gone on to tell the following:

“Now I’m thinking about how I’m going to get my money back from that. I don’t know what to do now.”

Interestingly WFTV media attempted to get in touch with our hero, and they tell after several attempts, Gregory Kennedy eventually got back to the outlet. Via text of course.

“Unfortunately businesses are forced to close across Orlando every day especially in the restaurant sector,” Kennedy said via text. “I am working to resolve issues including final paychecks as quickly as possible.”

Groupon has since told customers that it will be reimbursing customers. No word yet on whether Jodi and her colleagues will be getting their back pay yet…?