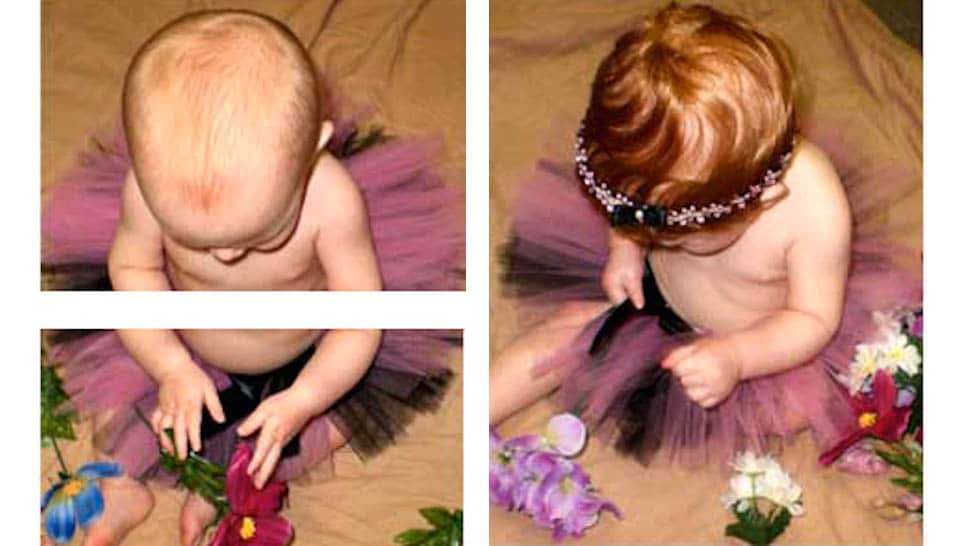 Here’s something that’s causing some of us in the media to chaffe. It’s called the baby wig. Not a bad idea if you’re going bald one guesses or if you find such things delightfully playful. But then again let’s all ask a sensible question. Do baby girls really need a baby wig in the first place? Which is to say what are we really driving at when some of us insist that even baby girls look more feminine or rather assert their femininity from the get go?

According to the makers of Baby Bangs!, their svelte little creation will ensure for the price of $32 that no one will ever confuse your little baby girl for a baby boy, because that too might me a little unfathomable and in some way risks denying your little baby girl the femininity that she is suppose to be fully immersed in even at the tender of age near zero.

According to the site’s website, Baby Bangs! is the brainchild of a mother and daughter who wanted to create a miniature hair piece suitable for newborns to wear.

Tells the site: ‘At Baby Bangs! we believe in the beauty of childhood.

‘Our unique designs are sprinkled with magic- inspiring a world of whimsical wonder and mystical magical memorable moments for you and your baby girl to cherish forever!

‘For she is, and always will be, your little princess!’

Note the little princess forever part? Kids forgive me if I am wrong but isn’t the part about having children is to allow one’s child to luxuriate in their infancy? Is it really so incumbent upon us to emerge one’s child in the psychological rigors of what it is to be masculine or feminine at such a young age? Isn’t it better just to let one’s child be that, a living bundle of joy that comes to find its way in the world with its innocence and purity intact? Isn’t that part of the reason why we love our children so much? Or is this society’s way of telling us that even our newly born children have expectations that we demand of them even if they can barely fathom the world?

Reflects jezebel: ‘So the princess dogma is starting at such a young age that a newborn’s natural (downy-headed) state is somehow undesirable?

‘Is the window of time during which a woman’s physical appearance isn’t subjected to constant scrutiny and held up to strict standards going to narrow so much that all fetuses will need beautiful virtual makeovers.

‘Babies all look the same; that’s kind of their thing. It’s not only unnecessary, but also pretty much insane, to start forcing cosmetic enhancements on a child too young to even have hair on her head.’

And lest you think it’s just us media types that might be feeling a little circumspect about the latest baby must have, you folk on twitter are also screeching loudly.

Wrote user wrote: ‘I despair… RT”@pandy92: There’s a website selling wigs for baby girls so they don’t get mistaken for baby boys.’

Another added: ‘*Projectile vomit* RT @mssusieday ‘I’m not a boy!’ AAAAARGH. RT @sarahcrossan: No no no no no. http://baby-bangs.com/index2.php’

How will your baby survive if she goes a month or two without everyone knowing she’s a girl?