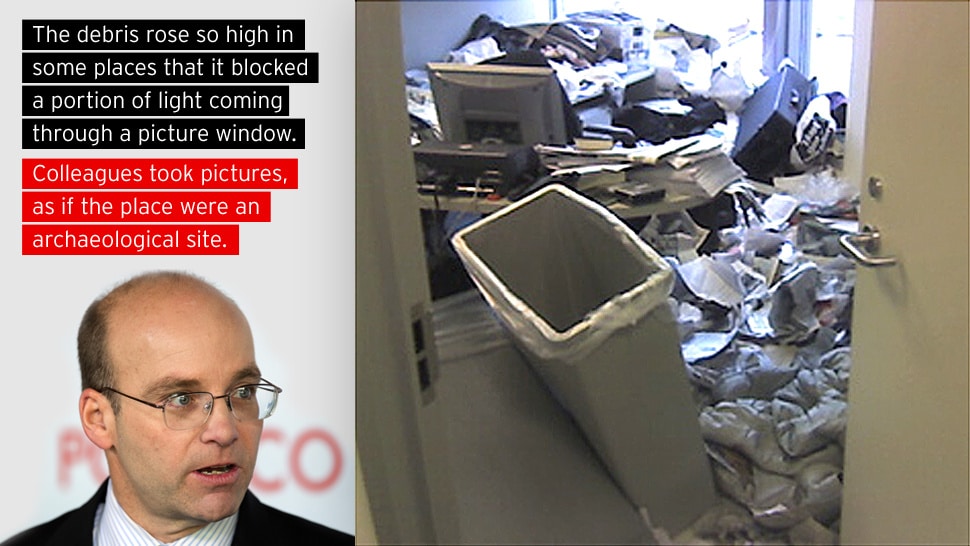 Here’s something that may interest some of you wondering how the minds of America’s greatest journalists work. Think clutter, think action packed, think desperate, think disorganized, think who cares? Things that may have all been on Politico star White House correspondent Mike Allen‘s mind when the above image was first taken back in 2007 when at the time he worked for Time.

The above photo surfaced after gawker decided to reach out to readers and ask if anyone could provide a tantalizing picture of the star correspondent after the New Republic ran an interview POLITICO co-founders John Harris and Jim VandeHei.

Personally I can’t figure out why gawker felt the need to ask for such an image unless of course they had one to go or were fishing to embarrass Mike Allen? But then again gawker unlike Mike Allen are in the terrible business of tabloid assassination whilst Allen is in the business of metaphorical political assassination.

Reflected Mark Leibovich for the NY Times a while back:

It got so bad at Time, where Allen was given his own office, that it became difficult to even open the door. His chair was raised at a crooked angle, as if it were not touching the floor, and the debris rose so high in some places that it blocked a portion of light coming through a picture window. Colleagues took pictures, as if the place were an archaeological site. It was disturbing to those who cared about Allen, especially after a photo of the office in a seemingly uninhabitable state made the rounds of the press corps and George W. Bush’s White House.

What do you think kids, you reckon Mike Allen’s desk these days is just as messy if not more….?

[Photo of Allen via GettyPremium]