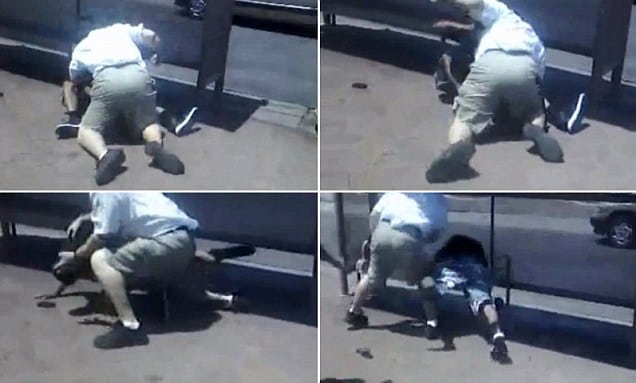 For your viewing pleasure, Arizona has released a video tape of one of its finest, Todd Allen Shields beating the crap out of a passenger during his route cause the passenger had attempted to use a reduced fare card to board the bus. Of course our hero was having none of that shit…

The incident said to have taken place this past Friday at the Montebello and 19th ave stop in Phoenix was sparked when Shields refused to believe that the man attempting to board the bus was young enough to merit access with the reduced fare card. Yes kids, Shields has seen all that gimmickry before and as you can see below he just don’t like it when you try to take the piss out of him. Does anyone?

At the time, witnesses went on to tell a verbal altercation ensued (naturally) before Shields threw the passenger off the bus.

Explained Desirae Madrid who went on to film the action stuff:

‘The bus driver stood up and picked him up to where the kid’s feet was literally off the floor and threw him out and I just remember seeing the kid fly off the other side of the little block that’s there and his feet were literally in the air.”

From there Shields proceeded to beat the crap out of the passenger on the sidewalk, even taking the time to slam his head onto a metal bench. It is said only one man attempted to break up the fight.

Went on to tell Madrid to ABC 15: ‘It makes me angry and sick to my stomach,’

‘He is the driver and deals with the public every day. He is supposed to be a professional.’

Hmm, Madrid may have a point there …

For his efforts our hero was arrested Friday afternoon and charged with assault in addition to disorderly conduct and criminal damage.

Todd Allen Shields is an employee of Veolia Transportation, a Phoenix city contractor that runs the bus system.  He has since been put on investigative leave, pending a formal investigation into the incident. Oh dear…