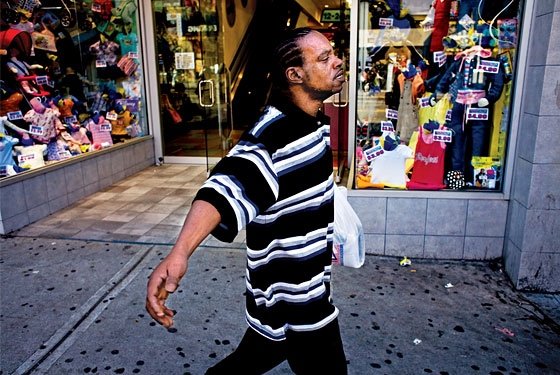 Eddie Wise, the infamous Bronx panhandler has been found dead, said to have died alone after squandering his share of a $15 million settlement he and other beggars won against the city for their right to panhandle on the streets of NYC.

The beggar first came into prominence in 2005 when he sued the NYPD to defend his right to peacefully panhandle. He was dropped from the class-action case in December 2006 in exchange for the handout of a lifetime: $100,001. A sum that it has been discovered he blew away principally on cocaine.

According to an autopsy performed, Eddie Wise had died of of a brain-stem hemorrhage due to acute cocaine intoxication and hypertensive cardiovascular disease. The 51 year old is said to have been discovered in a dank basement on East 158th that he shared on January 28th this year.

Told Eddie Wise at the time of his settlement:

“Everybody in the neighborhood is thinking that . . . I’m going to be broke pretty soon. I got to prove to myself that I know how to handle this money. One hundred thousand dollars ain’t no joke.”

Unfortunately it was not to be as Eddie Wise was soon back to a habit and a way of life that one wonders by now had become deeply ingrained with him.

Tells Sharon Persaud, his 37 year old widow: “Eddie was a good man. He worked hard; he was always cheerful. A lot of people didn’t give him a chance.”

Which of course might also provoke the comment: ‘Did Eddie Wise really ever give himself the chance? After all it’s not too often someone down and out gets a chance at a six figure largesse only to go and blow it…’

Goes on to tell his widow: “This time, he wanted a better life. We planned on leaving New York and buying a house. We had high hopes, but they never came through.”

Goes on to tell the nypost: In 2012, the city settled the suit Wise had started on behalf of panhandlers arrested long after the state’s loitering laws were ruled unconstitutional.

Wise’s lawyers were awarded $3 million, and eight original plaintiffs got $25,000 each. The rest was to be divided into small settlements.

Last year, attorney Katie Rosenfeld said Wise was due for another payout because he was arrested again after his 2007 settlement.

He never received it.

Persaud goes on to tell that she doesn’t know where Eddie’s money went but suspects that family and acquaintances leeched it. He was rumored to have bought a trailer for his uncle down south.

“I loved that man so much. It was always me and him. He deserved better. His life was hard.”

Which perhaps posits the idea that everyone at the end of the day has challenges to contend to in life, some it seems do better than others,give or take a large windfall or none what so ever…perhaps in the end Eddie was destined to self capitulate because maybe that’s what he really sought or understood?