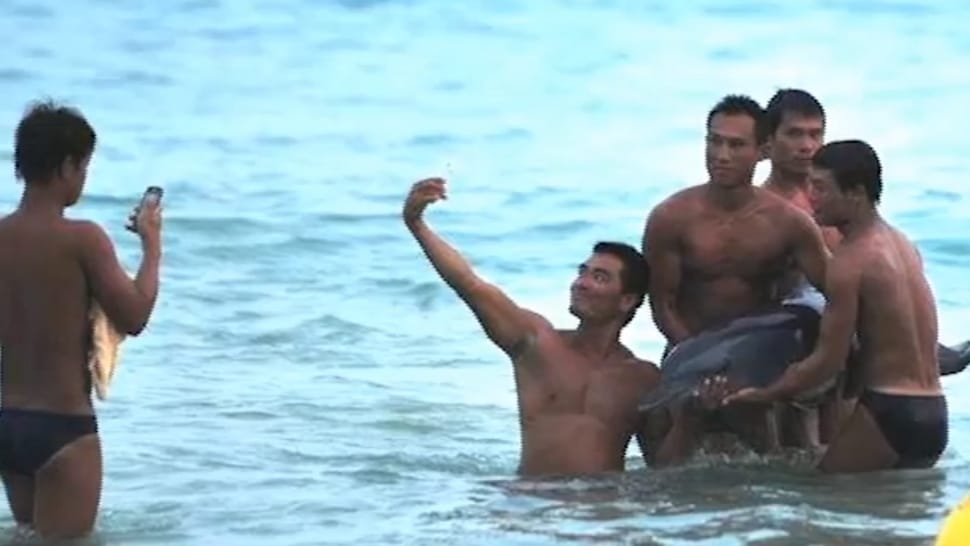 It may have been in bad taste, but really who can resist the temptation to take a picture with a stranded dolphin whilst you are out going for a swim at the beach.Not you I assume, right?

Thus starts the current dichotomy after the above image was released when it later came to be revealed that dolphins stranded off the southern Chinese province of Hainan  end up dying.

At contention is whether the manhandling of the dolphins itself caused the dying or whether the simple act of posing next to a dying mammal itself was tasteless, keeping in mind mankind’s avid love fest with dolphins.

Reports have it that the dolphins may have become lost, stranded or simply hit by an errant boat. Either way users on Chinese microblogging service Sina Weibo were none too pleased with the above image.

“When even the basic respect of life is lost, I just want to say, how can I be proud of you, China?” one user said in a typical comment.

“Chinese style tourism is not about relaxation, but for showing off where one has been…Only by posting the pictures and getting praise and compliments, can the tourist feel he didn’t spend the money in vain,” another said.

“Dolphins, as highly evolved mammals, have an IQ only a little lower than humans. But those people in the pictures are worse than pigs,” wrote another.

Then again if one is to examine China’s dismal human record (not that the US’s is that much better despite the media pr machine telling us otherwise) are we really surprised by the opportunism displayed in the above image? If locals can’t treat humans all that well ought we be surprised when it comes to the handling of animal rights?

Then again should we really be condemning the individuals in the picture, the picture taker? Are we loathe to admit that we now live in a voyeur culture where real meaning isn’t necessarily derived from acting, helping or doing but sometimes simply being seen in a photo doing our favorite must do activity alongside our favorite must have friends, dolphins included…?

It should also be noted China, which has a growing animal rights movement, does not currently have any laws to protect non-endangered animals. On another front the individuals in the photo have not been identified and at present it is not understood whether authorities are likely to engage them or whether they ought to engage them in the first place.