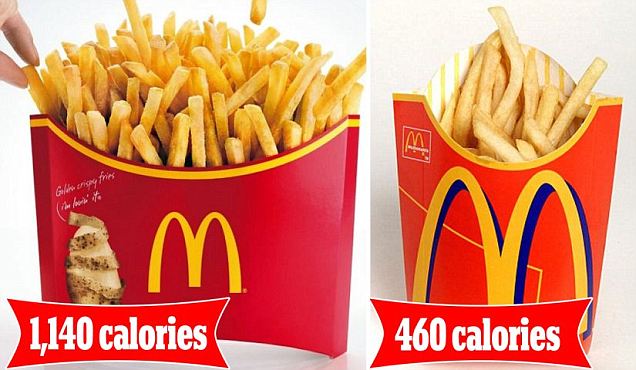 Kids how’s your appetite? Feel like scoffing your face in with some lard and salt and a smattering of shoe string fries? Good because McDonald’s has come out with their new yummy uber dosage portion of fries. And the good thing is that shit only comes with 1140 calories which counts for more than half the average person’s recommended daily intake.

As an added bonus the good shit also comes with 57 grams of fat and almost 800 milligrams of sodium. Yes I can hear you screaming yowza from the top of your gizzards.

Although McDonald’s may be attempting to bill themselves as a healthy alternative as it has taken to introducing lean meals in recent years, it seems the fast food vendor really understands what makes their typical customer guzzle at the feeding station. Fries. Lot of them. Stacked one over the other and then some…

Billed simply as the Mega Potato the new plus size portion is set to debut in Japan on Friday and will cost circa 490 yen which is circa $5. Yes I know I am thinking nice crispy notes in my coffers too.

Japan Today reports that the Mega Potato is being billed as ‘perfect for sharing’. The launch comes after the director of nutrition for McDonald’s insisted that its menu can be good for you.

The latest addition to the yummy stakes comes after Japanese students were photographed not too long ago having “potato parties” in McDonald’s. With a low promotional price of about $2, bixches were getting together to buy huge amounts of fries. In one instance last October, a group of high schoolers bought 60 servings of large fries and spent three hours downing each and every last one. Something your soon to be ballooned ass can look forward to as well.

The Mega Potato is set to be part of a new promotion in Japan that will go on until the end of June. Which fortunately may be a good thing after all…

McDonald’s: Shouldn’t you be scoffing all them yummies down your coagulated throat too?