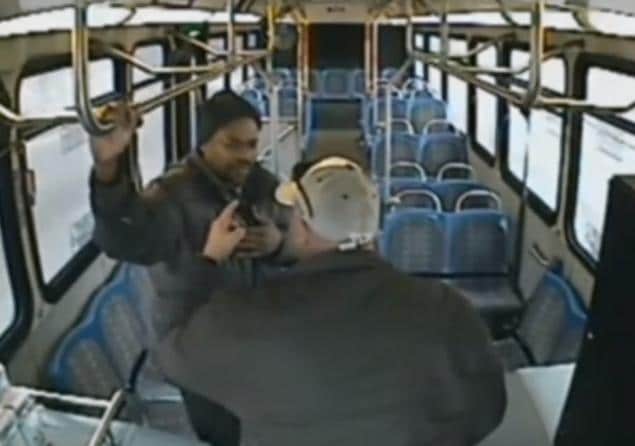 Out of Lincoln, Nebraska comes the tale of one bus driver who took to assaulting and dragging a passenger off the bus because they were asking too many questions.

For his efforts, Troy Fischer, 43 was fired from the StarTran Bus service after the March 23 incident caught on surveillance tape made the rounds.

In the video, Fischer can be heard reprimanding a bus passenger after they took to asking them questions about the bus route. It is understood the rider was new to the area.

Tells Fischer in the video: “What did I say about the next question you ask me?”

From there Fischer demands the rider get off the bus, stops driving the bus before shoving the man onto a seat and proceeding to belt him around the head a number of (18) times. As you can imagine a definite no no when it comes to driver passenger relations…

Fischer then grabs the man’s jacket, drags him out the front door of the vehicle, leaving him on the side of the road.

Goes on to tell Fischer to a supervisor on the radio: “I put him off the bus.”

At the time it is understood the supervisor upon responding to Fischer’s initial assertion of an unruly passenger gave him two options. To either tell the rider to leave voluntarily or call the police. Instructions that Fischer in the end failed to heed.

But it gets better. After having assaulted the passenger, Fischer then asks the supervisor if it would be fine if he could erase the surveillance footage.

Suspecting that something was not quite right, the supervisor instead advises Fischer to return back to the garage where the surveillance tape was later found.

Interestingly investigators have not been able to locate the passenger involved in the attack.

Isn’t it time you respected your overworked and harried bus driver too…?