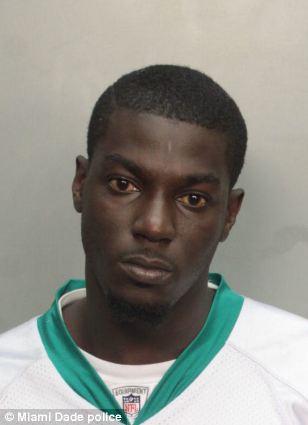 A Miami pimp, 26 year old Roman Thomas lll has found himself in a spot of bother after his ass was hauled in after it was disclosed he forced a 13 year old prostitute (does it get any sadder ?) to tattoo his name on her eyelids after she threatened to leave him.

The girl was branded with his street name on either eyelid. ‘Suave‘ (yes the irony…) on one eyelid and ‘House‘ on the other.

The girl, understood to be a runaway has once again underscored the plight of young runaway girls who often resort to the attentions of older men who give them the attention they so desperately often seek before eventually coercing them into a life of prostitution.

Thomas’ arrest comes off the back of having already served four years in state prison for having sex with a minor.

It is understood the young girl was being prostituted through a classified advertising website for those who sought the company of underage girls.

The girl is said to have been plied with liquor, marijuana and the drug Molly (an amphetamine) as she had sex with men at the Miami Shores Motel.

Also facing charges includes Shanteria Sanders, 23, who also has “Suave” tattooed across her chest. Along with Thomas she will be facing charges of human trafficking, false imprisonment, lewd and lascivious exhibition and delivery of a controlled substance to a child.

Police say Thomas and Sanders gave the girl condoms, coached her how to talk to johns and began bringing in clients who paid up to $100 an hour.

After each encounter, Thomas and Sanders immediately came into the room and counted the money. Once, they duct taped her and “threatened to kill her” after an argument over missing cash, according to an arrest report.

When she threatened to leave, they took her back to the Flea Market. On the right eyelid: “Suave,” Thomas’ street name. On the left, “House,” suggesting she belonged to his flock.

The miamiherald goes on to tell that the girl had run away from a tumultuous home life according to police files. The girl’s mother, fearing she was being pimped, tracked her down her down and found her with Thomas and from there called Miami police.

The teen now is receiving therapy and health services through Project Gold, a program of Miami’s Kristi House, a nonprofit that assists abuse victims.