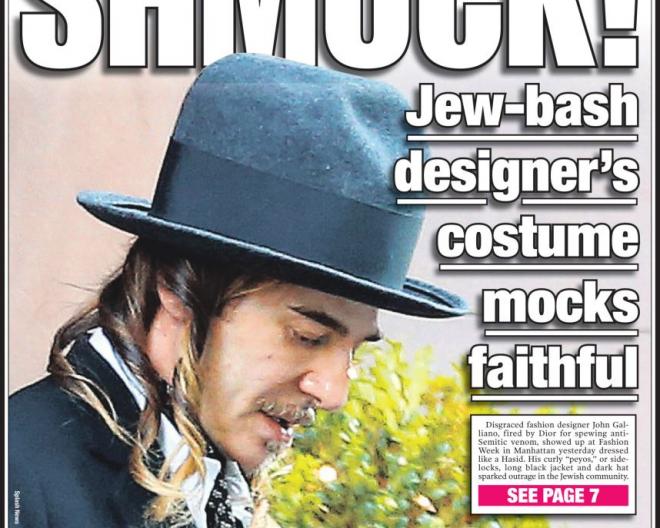 Could John Galliano be making a comeback?

John Galliano promises you life will be better once he checks into Rehab.

How much can a fashion icon like John Galliano get away with in the first place?

Maybe John Galliano thought no one would notice and if they did they would understand he is a living fashion icon and can essentially do as he pleases. Or maybe he knew he’d get reprimanded anyway but decided to go ahead cause who can ever pass up more press on your prowess to be anti semitic?

Nevertheless the outfit many have argued is strongly reminiscent of Hasidic Jewish garb has many in the Jewish community outraged given the fact that he is not Jewish (can only Jewish people wear outfits that resemble Jewish garb?), has a history of negative comments in public towards Jews and that on some level his choice of clothing may be mocking the community given that it really looks too cool and vaguely high brow. Something of course most Hasidic Jewish insiders would never dare admit glistens in their chops.

Reflects ibtimes: Galliano got support this time from a surprising corner, the Anti-Defamation League. The Jewish advocacy group claims that the Post’s assessment of the designer’s dress was an “absurd distortion,” The New York Observer reported.

“There is no truth to their accusation that John Galliano was dressed in Hasidic garb, and anyone familiar with the dress of traditional Orthodox Jews should not mistake what Galliano is wearing in the photograph as ‘Hasidic garb.’ Hasidim do not wear fedora hats, pinstripe pants, blue jackets or an ascot tie,” ADL chief Abraham Foxman said in a press release.

And The Cut notes:

…Galliano has been wearing this exact outfit for ages, right down to the ringlets in his hair – which are definitely not peyos, as they circle his whole head. The exaggerated bowler hat, baggy cropped pants, and long jacket are such well-known components of his uniform that Bill Gaytten, Galliano’s successor at his namesake line, modeled an entire menswear collection on them for spring 2012. Indeed, the hat Galliano wore yesterday looks to be one of Gaytten’s recent designs.

None the less many remain troubled by Galliano’s suggestive behavior.

“This was not very smart, unless he really wants attention. I’m hoping that this is not in any way a mockery through this attire,” rabbi and fashion designer Tobi Rubinstein Schneier said to the Post.

While a commentator from the Lower East Side told the Mail Online, “Either Galliano is so deluded that he thinks wearing an outfit inspired by the dress of Hasidic Jews is some kind of apology, or it is simply another callous insult from someone who is already known as a drunken anti-Semite. Either way he’s an a**hole.”

Galliano’s spokeswoman, Liz Rosenberg, went on to tell the NY Post who by now we’re having a field day crucifying Galliano for his ‘suggestive and irresponsible behavior’ : “Your accusations are not at all correct.”