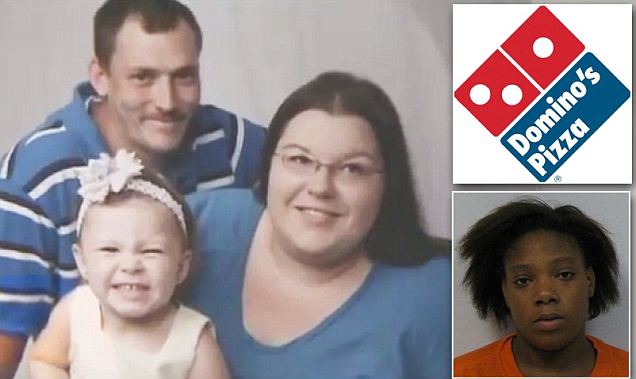 The pizza wasn’t that tasty after all, but the murder must have been delicious.

In another chapter in the ongoing pursuit of the banal, it has been reported that two teenagers have been held in custody pursuant to an incident which saw the horrific murder of a Dominoes delivery person.

dailymail.co.uk: Police in the US have arrested two teenagers in connection with the murder of a Domino’s Pizza worker who was stabbed 50 times and bludgeoned as she delivered an order to them.

The stabbing took place on Thursday evening as the victim, 27-year-old mother-of-one Elizabeth Hutcheson, was delivering pizza to an address in the small city of Cedartown in Georgia.

Is this what plays for kicks these days? Or was it just a game of dare? Or just the sheer thrill and exhilaration of murder?

Police said a pizza order was placed by telephone at Domino’s shortly before 9 pm on Thursday and Ms Hutcheson was the delivery person sent.

Ms Hutcheson was found bleeding in the doorway of the house at around 9.15pm by police officers conducting a traffic stop nearby who rushed to the scene when they heard her screams.

What could Ms Hutcheson been wondering as the first of many jabs entered her plexus? Is this one of the unsaid fears of delivery to unknown persons? Then again aren’t so many occupations laden with risk that most of us barely acknowledge? The taxi driver picking up transients, the trial lawyer who tanks on a high profile case, the journalist who reports the wrong thing? But this? Ms Hutcheson it seems was simply at the wrong place at the wrong time…unless of course the assailants knew her and there were scores to settle?

Police said both attackers fled on foot after the stabbing, and after a search overnight involving many different police teams, officers apprehended the teenagers at around noon yesterday in a nearby field.

‘We had been one step behind them most of the night,’ Cedartown Police Department Assistant Police Chief Jamie Newsome told reporters. ‘We were finally able to catch up to them.’

Ms Hutchinson leaves behind a fiance and a 4 year old daughter. Dominos in the interim has offered to pay for the funeral expenses of Elizabeth Hutcheson. Indeed….