Oh my! Ryan Gosling and Eva Mendes still together after all.

Kids, it’s time to start looking under all the nooks and crannies that your tender soul can imagine. Why? Because our collective hero Ryan Gosling, the savior of British journalists with pink hair has purportedly twitted that his fabulous self has hidden a special 200 Ryan Gosling hawt bixch anointed easter bunny eggs just for you. Only problem is no one knows if the whole thing is legitimate…

gawker: At the time of this article’s publication, @GoslingEaster has just over 50 followers. Each egg has a link to the Twitter account, though, so that number is likely to grow throughout the day. And while these eggs may never have been touched by Ryan Gosling himself, they do include charming messages and holiday greetings.

Kids, what’s a bit of Ryan Gosling fantasy amongst friends and all those love starred 16 year old bunnies? I wonder if the easter bunnies come with their own version of charm and of course those washboard abs?

Apparently the eggs come with a picture of the hawt bixch and more instructions on where to find the real deal: “Hop on over to my house already.” The slips of paper are signed, “Happy Easter from Ryan Gosling.”

Update via mashable: The creator of @GoslingEaster is advertising copywriter Jenna Livingston, who told Mashable she is not connected to Gosling in any way. “I did this project to follow up with another project I did earlier in the year that went viral — Starbucks Spelling,” Livingston says. “I had a blast doing that, and interacting with people, so I figured why not try something else and see if it can go viral, too.”

And for a moment I really wanted to believe like every other 16 year old girl it was really Ryan. Oh the heartbreak… 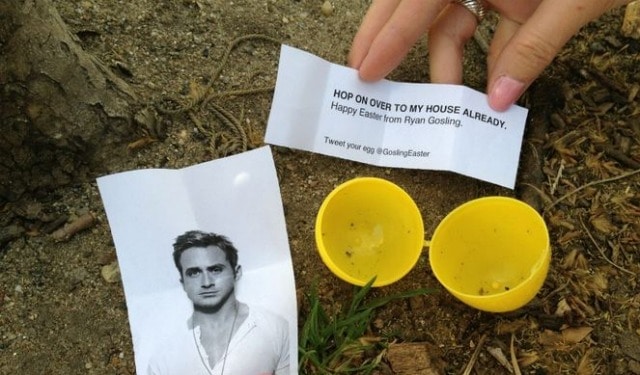