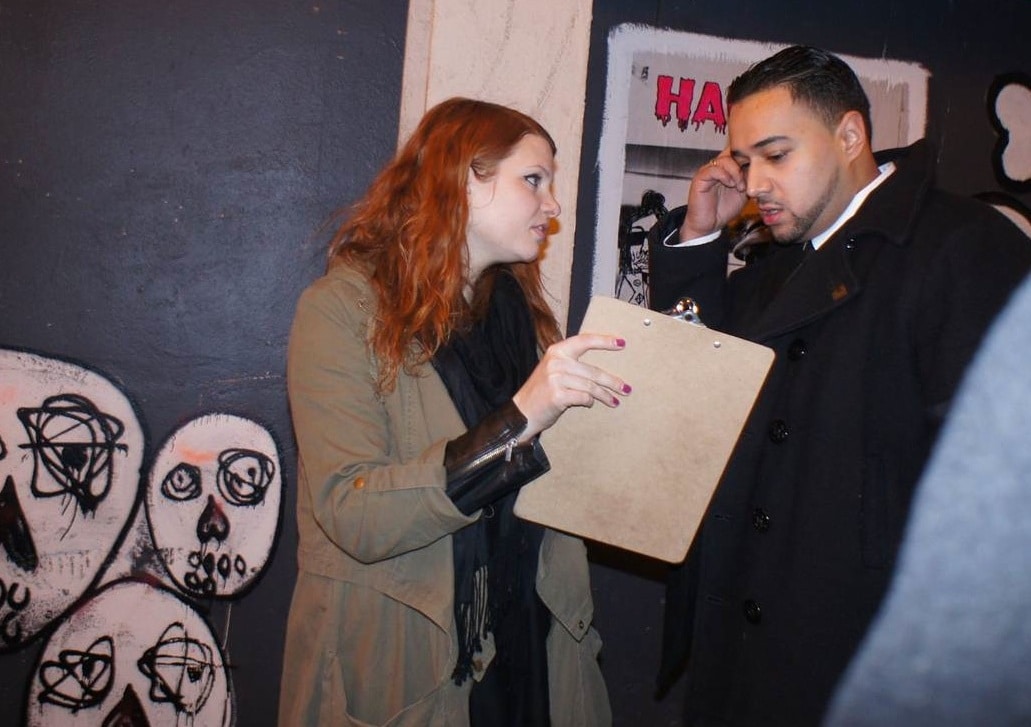 NYC: Last night saw me and a couple of us gallivanting about town and at one point opting to check out Nur Khan and Scott Lipps VS Magazine bash at the Electric Room over at the Dream Hotel on West 16th. Well that was the plan until things got a little hairy.

Of course what you have to understand as a tabloid journalist, nothing excites me more than the sight of a house on fire or a brutal murder in place. Not that I would ever will that. But what also sets me on fire is the duplicitous behavior of pr people who think they understand journalistic integrity. Well once we go in that direction, then kids, I’m more than in a hurry to get my story. Shall we then….?

As we were all made to wait in a long line, (already the party, a mere hour in was packed to the gills we were told) a few people started to brazenly break out of the line despite security’s well intended efforts to keep the fashionista’s egos in line (what a thankless task). From up the ramp, one can see them sobbing how beautiful they were or who they knew such and such. Standard policy in a nightclub scenario. Some got in, some had to get to the end of the line.

Now before I proceed with the story you should all know I never received an invitation to the party (and you will soon find out why) nor did I seek to RSVP for this event via other means which a talented journalist is able to exact.

Having by now after 20 minutes watched groups of hedonistic kids walk beyond the line the majority of us were made to wait in I decided to simply (as I should have as a member of the press) approach the door help and explain why I had come. It would either illicit- ” A yes, we know who you are and we would be thrilled” or a simple :“No, it’s a private party, no press tonight. Or you’re not on the press list.”

Either response would have worked fine for me, as I am hardly in the business of breaking down and insisting the door help get me in or my social status will suddenly diminish(as is implicitly inferred by not getting in and conversely reinforced if you get past the vetting process). Ironic, because as blogger/journalist, I am also in the vetting business. Which brings up what happens next. Hold your breath kids. Here’s where it gets real juicy.

As I take out my card (yes, the old press card trick,- could you imagine if I was a banker- I’d have to take out my Ferrari key chain, blah…) asking the red haired girl with the clip board to let Scott Lipps (One Model Management‘s CEO) know that I was here and to see if he would be happy to receive me despite my lack of RSVP.

At this juncture a young woman who’d been watching from the wings approaches and takes my card, looks at it and then abruptly tells me that there is “No way I’m getting in.”

Curious as to her adamant stance I ask why.

She then proceeds to tell me how our journal gave a quite a nasty write up of the Mondrian (her client ) and how much it supposedly crushed them.

“You betrayed our trust!” She whimpered. “You blew the deal. You can’t expect us to let you into this event now.”

By now I was wondering what exactly I was listening to? Was I somehow understanding that because our past coverage didn’t sing lullaby themes that we had somehow failed in doing our job? Then again I thought, she was probably hoping for a positive write up- but then again as a member of the press am I not also entitled to voice an opinion that might not agree with the paid help’s?

Had it really arrived at that place where journalists must now be captive to the demands of publicists? After all if the publicist is getting paid by the client to get a positive write up does that mean by virtue of attending a venue and writing about it I am also now required to give a positive write up? And what happens if I don’t? Will I be condemned by Nathan Ellis’s Syndicate media group?  Isn’t this some kind of black mail? Write what I want to hear or I will never invite you back? Not write what you must and we can sure use the feedback if we agree? After all isn’t that what press is there for? To foster a dialogue?

Kids, it’s starting to become a dangerous world  if you and me can’t go to a nightclub event for fear that we wont be allowed in because we don’t accede to the preferred expectations of the door bixch on retainer. And you wonder why the quality of so much journalism out there is going out the window. Don’t believe me, just ask Syndicate Media Group.