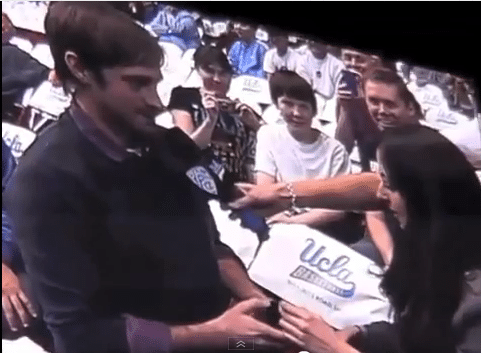 Nothing could be more humiliating or equally devastating (forget about finding the courage to do it in the first place) than having your wedding proposal rejected. That said perhaps nothing can be even more devastating than having your proposal denied than having the rejection relayed and magnified on a jumbo sized TV monitor in front of thousands at a basketball game.

It is after all a heady moment, all eyes are on him and her and the anticipated answer is yes, but then again that is admittedly part of the exhilaration will she say yes? She just might after all say no. Right? Which is exactly what happened to one man as the TV camera started taking in unsuspecting couples at one UCLA basketball game, as the ‘mistletoe cam’ homed in on one couple and the ensuing public disaster.

As globe and mail note: Instead of kissing, the young man stands up and presents his girlfriend with a ring. Initially smiling and looking surprised, the woman sits in silence and then bolts from the arena as onlookers cheer and ask her to give an answer. A collective gasp ripples through the audience and the young man is left down on one knee.

Which as the globe aptly wonders why do people risk making wedding proposals at very public venues. Reflects one commentator on the popular website reddit (where the story is going viral):

If your relationship has not reached a level of familiarity that includes discussion of marriage and whether it is mutually desired, you should not be publicly proposing marriage. One person does not select another. This sort of decision, done properly, follows mutual expression of a desire to build a life together.

And then there’s this interesting comment too from a woman:

I think many guys assume all women want to get married and will say “yes” to any guy they kind of like and who proposes. Given the crap you see everywhere — bridal magazines, TV shows and movies with lonely single women dreaming of marriage, how-to books on getting men to propose, stupid Facebook updates, etc. — they have some basis for thinking that. Not that the crap is true, of course, but it’s pervasive.

I hope it’s better than my mother’s generation, though. She’s about 80 and she’s still getting guys who hint about marriage while talking about their kitchens and homes needing a woman’s touch. Yes, they seem to want a maid and cook as much as a partner.

As for the legitimacy of the video of whether it was real or manufactured, the globe offers this: a sports reporter from the LA Times tweeted that a UCLA spokesman confirmed it was the real deal.

Hmm, perhaps it would all be so tolerable if only it was staged. Gentlemen you have been warned….