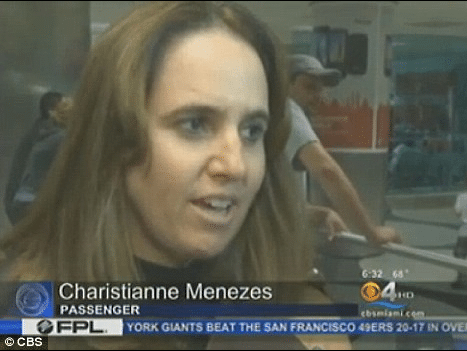 Your worst dream were 136 passengers plus crews actual nightmare on a trip from Miami to Brazil last night on American Airlines flight 980, after the plane two hours into an eight hour flight were hit with unexpected extreme turbulence.

abc: “Everybody just moved up in their seat and some of them just smashed against the ceiling,” passenger Gillas Correa told ABC affiliate WPLG.  ”The turbulence is like I’ve never seen anything, I mean, like not even a roller coaster.”

Ugh, just reading about it is causing this author to suddenly lurch forward…

The crew was said to be caught by surprise and thus took the brunt of the injuries.  One flight attendant was reportedly hit by a food cart that flew into the air, which damaged the plane’s ceiling and then landed on her.

Firefighters from the Miami-Dade Fire Department met the flight when it landed in Miami around 6:30 p.m. local time and took five of the injured crew members to area hospitals.

Who reading this hasn’t had the extreme displeasure of sitting on a turbulent flight and secretly openly wondering if today is the day you meet your maker. It may after all might be a very common scenario amongst veteran air workers, yet even then one supposes no amount of experience or strength of resolve can turn back the impulse to think the worst. This time the worst did not happen.

“The lucky thing is that we had a medical room doctor, some ER emergency room doctor,” passenger Correa told local media.

Crying because no matter what your station in life is on land the air, where you went to school, which board you sit on, wind and nature is irresolute to, which is to say any sense of entitlement, justice or moral code literally flies out the window when you are 30 000-50 000 feet up in the sky at the mercy of the law of gravity that you continue to defy day in day out.