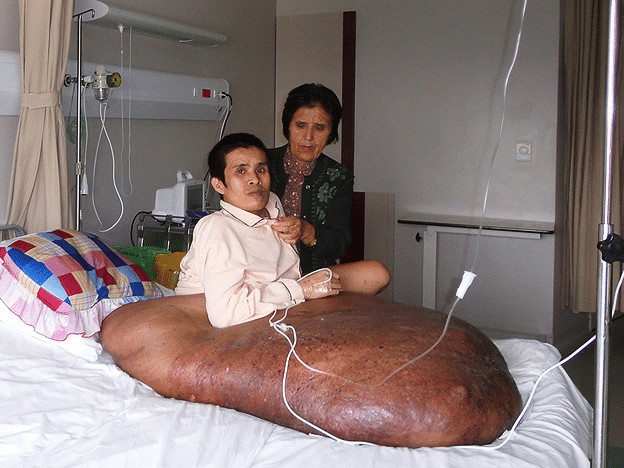 A 31 year old Vietnamese man is risking his life in a complicated surgical affair that it is estimated to last ten hours and will attempt to remove a 198 pound tumor that  first made its appearance on Nguyen Duy Hai‘s right leg when he was a young boy.

FIrst operated on in 1997 for the tumor, doctors were then unable to remove the tumor and were forced to amputate below the knee. Since then he has been in poor health and doctors, as lead by an American doctor McKay McKinnon have agreed to once again attempt to remove the tumor now that Nguyen Duy Hai’s lungs are in a more stable state, which the tumor taxes. A previous scheduling in November of last year had to be postponed due to Nguyen’s poor health at the time.

Offered Ngyuyen who wll be operated this Thursday at France-Vietnam Hospital in Ho Chi Minh City:

“It’s common for people to fear death, and I’m no exception,” Hai told Tuoitre News, a Vietnamese website. “But when I heard that Dr. McKinnon had decided to come back to Vietnam one more time to give me a new life, I became more hopeful.”

Sustaining Ngyuyen is the knowledge that Dr McKinnon has previously operated on other individuals with similar tumors. In 1999 he was able to successfully operate on one Michigan woman who had a similar size tumor, who was older than Ngyuyen and in worse health. She managed to survive the surgery and is now living a normal life, but at the time of the operation she required 50 units of blood transfusion and required a years worth of physical therapy after the operation.

All of which raises the uncomfortable question is it better to risk complication and death (doctors only give the operation a 50 % chance of success) to try and remove the tumor in an effort to live a normal life or does one resist surgery in an effort to eke out a few more years of life? Then again what type of life can one really have when they have a tumor taxing your major organs and who is to say if the tumor doesn’t continue exponentially keep growing, ostensibly forcing the hand of one 31 year old man.

Update from Vietnam as of 10 am EST, Jan 5: tuoitrenews

Surgeons have successfully removed his tumor and are now suturing his incisions, a reliable source close to Tuoitrenews said.

Overall condition for Hai is stable and he is still holding well. The operation is expected to be done at least at 9pm (Vietnam time), the source said.

Hai’s family burst into tears of happiness after being told that Hai has survived the operation.

The 32-year-old, who has a 90kg tumor on his right leg, was operated on at 9:00am on January 5, 2012 at FV Hospital located in District 7 in which American doctor Mc Kinnon is the main surgeon.