Some jokes are best kept to oneself….

It seems like a British pair, Leigh Van Bryan and Emily Banting may have received the short end of the stick after being stopped at Los Angeles’s International airport (LAX) pursuant to texts the Department of Homeland Security (yes them again kids) interpreted as a potential threat to national security. The texts?

‘Free this week, for quick gossip/prep before I go and destroy America’.

Free to gossip, but not free to be allowed entry into the country? Kids, can we step back for a moment. Since when did publicly communicating amongst ones twitter followers about an upcoming holiday merit the attention of Homeland Security. Really, if you were going to ‘destroy’ America would you do it via twitter? You’d take a national ad in the LA times to give Los Angelos time to quickly evacuate the city.

Of course one has to wonder, if these two were foolish and stupid enough to acknowledge a legitimate desire to ‘destroy’ America wouldn’t authorities have come across a couple of surface to air missiles in Ms Banting’s handbag? Then again, for someone who has spent a considerable time in the UK, the term ‘destroy’ is often used as an affectionate adjective to party the town. Not that you would know if haven’t spent time in the UK. 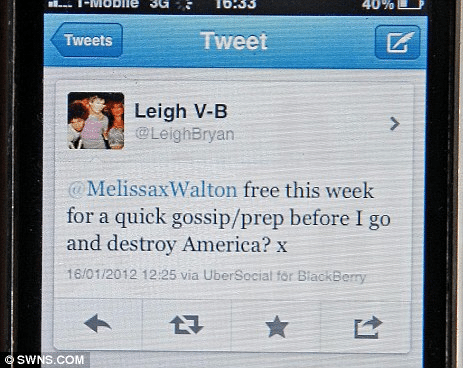 Despite telling officials the term ‘destroy’ was British slang for ‘party’, they were held on suspicion of planning to ‘commit crimes’ and had their passports confiscated.

Leigh was also quizzed about another tweet which quoted hit US comedy Family Guy which read: ‘3 weeks today, we’re totally in LA p****** people off on Hollywood Blvd and diggin’ Marilyn Monroe up!

Marilyn Monroe? Kids, well that does it for me. After all you all know she was a trainwreck and an underground truant bent on hell raising and destroying the country. Right? And she did sleep with the president too…hmm.

But it gets better….don’t nightmares always get better?

Federal agents even searched his suitcase looking for spades and shovels, claiming Emily was planning to act as Leigh’s ‘look out’ while he raided Marilyn’s tomb.

Kids, really when was the last time you travelled with a shovel in your suitcase? Really? Not even a designer shovel would in your wildest dreams make it in your handbag. Right?

After being quizzed for five hours, the pair were handcuffed, and put into a van with all the other vagrants you have come to loathe and fear. Yes, illegal immigrants.

After spending 12 hours in separate holding cells the pair were then put on plane back to England.

‘They asked why we wanted to destroy America and we tried to explain it meant to get trashed and party.

‘I almost burst out laughing when they asked me if I was going to be Leigh’s lookout while he dug up Marilyn Monroe.

‘I couldn’t believe it because it was a quote from the comedy Family Guy which is an American show.’ 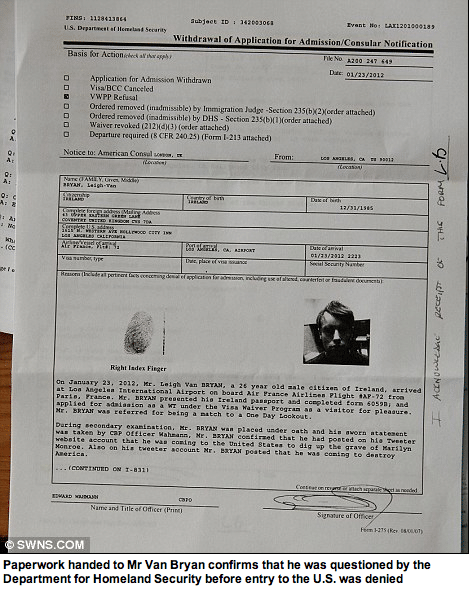 Kids, tell me you’re not jumping out the window with me? Tell me that our Department of Homeland is in very serious need of brain cells. Tell me that this is not the Monty Python show. Please someone….

When in doubt always assume the worst, the Homeland of Department does….ensuring c liberty one and for all is their unyielding motto.