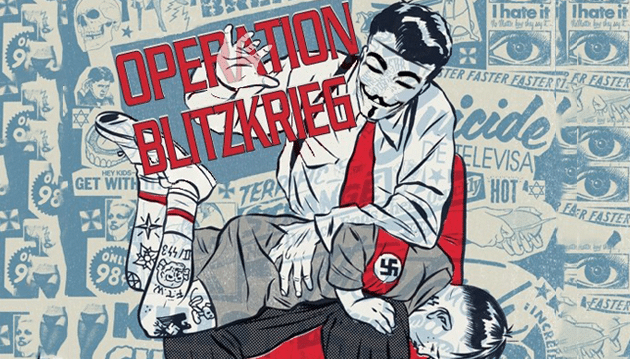 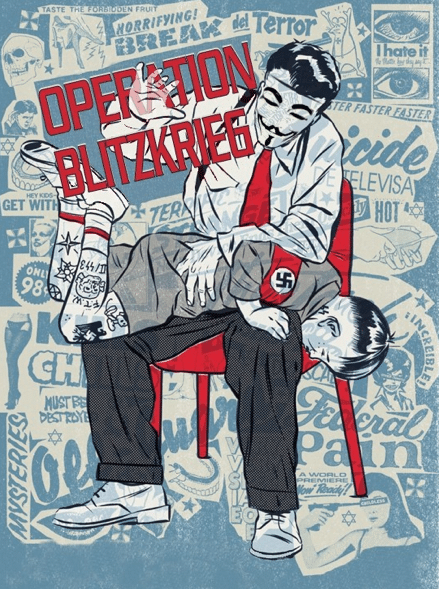 Last week it was a security think tank, and months before that corporations it deemed complicit in the entrenched class war but as of Monday the hacking group known as ‘anonymous’ have been going after German neo Nazi groups and their members. To date the group allege they have brought 15 websites off the web and exposed the names of hundreds of members.

Joining them are fellow hackers in Spain (a historical ally of Nazi Germany courtesy of the Spanish fascist movement of the 1930’s) who have also gone to work in posting a list of 1000 alleged customers of far right commercial outlets.

Nicknamed ‘operation Blitzkrieg’ and ‘Nazileaks,’ the group are making it difficult for those outed as far right entities or members to disavow such public claims by mirroring their names and websites on other websites.

What remains to be known is why anonymous has chosen to out neo nazi groups who admittedly do not preach tolerance or acceptance of ideas or aesthetics that don’t correspond to their outlook. Which is to say, does ‘anonymous’ suspect an imminent far right uprising or political mischief? Or is it a case that trying to expose corporates and financial institutions who one could argue hold a great degree of power has become of late a dangerous game with steep consequences and rather than being dormant ‘anonymous’ has sought to go after entities somewhat off the radar?

One commentator though does give pause for thought with the following comment:

Anonymous has nothing to do with political correctness. Actually their actions are more often then not disrespecting political correctness (hacking for example). They fight for what they perceive as justice with a focus on liberty (especially Internet liberty and transparency). They target crooked corporations and governments but also individual criminals (like the ones who try to sexually abuse children). Among others, they attacked the Church of Scientology (which is hardly representing Judeo/Christianity or traditional family values), the Iranian government for the manipulated 2009 Iranian presidential elections (not really a Western government, is it?), the government of Zimbabwe, Tunisia, Anguilla, Brazil, Turkey and Malaysia for censorship (some of the whitest governments in your opinion I suppose), the government of Syria for the anti-democratic stance (would you consider them Western Society?), the Muslim Brotherhood (another Judeo/Christianity, aren’t they?).

Ultimately it remains to be seen who ‘anonymous,’ will go after next, but one can be confident the hacking group are scanning the horizon, patiently waiting to see who it must expose next- maybe the media, North Korea, the Pentagon (aka Wikileaks), the house of Windsor?

For now though one can be pretty sure with respect to media most media outlets will stay committed to exposing the foibles of celebrities whilst anonymous takes on a game once the dominion of journalists before most of them also became part of the establishment anonymous seeks to force to come clean with its movements.