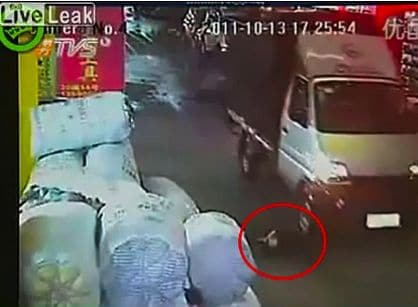 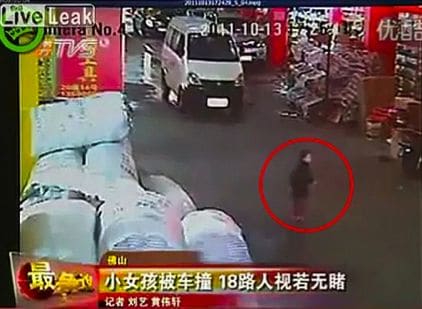 It couldn’t happen anywhere else or could it?

China in the last few days has been sent into an emotional turbulent soul searching mission as news begins to seep the country of an incident that defies utter comprehension and what it ultimately suggests about life in China, attitudes towards life and the seeming numbness of its inhabitants to even the most visceral situations.

It all began after a video of a two year old toddler, Yue Yuem being run over by not just one van but two vans, and then ignored by up to 18 (yes this is not a typo) passerbys over the course of 7 minutes as she writhes in pain surfaced online and began to steadily make the rounds. In the video, the child is seen unwittingly attempting to cross a road at the Guangfo Hardware market in when she is hit by an oncoming van. The van driver stops, perhaps to consider his options, before choosing rather than getting out to tend to the young girl to continue driving, if you can believe that.

As she lies there lying on the ground shoppers casually stroll by, willfully oblivious to the young girl who in broad view can be seen writhing in pain, unassisted. At this point some more time goes by, before she is once again run over by another oncoming van who apparently doesn’t even make the effort at the very least to drive around the girl lying in the middle of the street. Once again more passer bys are seen walking by the girl, indifferent to her plight until a 19th woman finally steps and accords the young woman attention and before her mother suddenly appears, shocked at the sight of her daughter in disarray.

As the incident began to be replayed over and over on the web, a series of commentators started to come out and offer their thoughts on the incident.

Says one user, Xiaozhong001 on the micoblog service, Sina Weibo: “Really, what is up with our society? I saw this and my heart went cold. Everyone needs to do some soul searching about ending this kind of indifference.”

Which raises some immediate questions, how can it be that there are so many indifferent people or perhaps to put it another way, why is there such a deluge of indifference? Does it have something to do with China’s history of human rights abuses, its intolerance (by Western standards) towards its labor force, the sense of alienation that has now come about as a few core individuals move into the financial stratosphere whilst a burgeoning group of individuals are finding themselves forced to do things once unimaginable in post Communist China to stay afloat. Could it be that society’s brutal and indifferent attitude towards its collective has now permeated to the common individual who has also by now learned that there is rarely a payoff in assisting another human being, and unless they are family or close friends it’s best to keep to oneself and deal with ones own dilemmas which are overwhelming as is on their own?

Another idea posited is that people in China are often reticent to help others lest they be blamed for that person’s misfortune and consequentially punished. Hardly the incentive to act with brotherly accord. But then again, what struck this author as particularly beguiling is the following comment that they came across in the dailymail:

As an adult American male, I would *never* touch a child I didn’t know, under ANY circumstances…. Every male in this country is assumed to be a pedophile under proven otherwise, and the LAST thing i need is to have my career ruined over some baseless accusations made after I tried to be a Good Samaritan BTW, we have “Good Samaritan Laws” here in the USA that supposedly shield GS’s from lawsuits, – Dr. X, Anytown , USA, 18/10/2011

And then this response:

12:01 Are you really a doctor? you care more for you’re career than a 2 year old child or any child for that matter?? I work in IT and do not get paid to save lives and I would run through fire if I knew I would have half a chance at saving a child totally stupid attitude. This is disgusting nothing more nothing less i also read a chinese website which has this story and they are also up in arms about this incident its not all of the country that needs help just a big percentage of the population.

Perhaps to castigate the Chinese might be a bit rash as it may well be that this type of behavior is part human nature, no matter where you live in the world and a growing reflection of the stratification of society not just in China where vast divisions within class structures have really started to take hold since the introduction of capital mobility, but a sympton of an amoral world that has trained itself that as long as it doesn’t happen inside their ivory tower it can be ignored and sidestepped until that is someone else starts watching (ie the media) and begins to point such things out.

Since the incident, the two drivers have both been brought in and charged with endangerment whilst the father had this to say prior to his daughter passing away:

‘Yueyue is so lovely. If I quarrelled with her mother and if her mother cried, she would tell us not to cry, she always tried to amuse us.

‘I just hope my child will wake up and call me Dad again.’

Editor’s note: Apparently reports that the child had died were incorrect. Yeu Yeum is still hanging on and making progress. – shanghalist