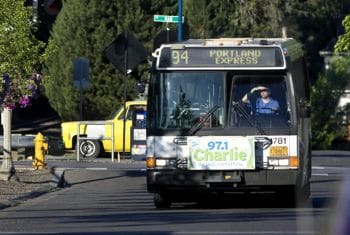 Let’s be honest, have you ever been on a bus, train or plane and thought to yourself as a child nearby cried uncontrollably despite the parent’s best attempts to placate it that you just wanted to tear your hair out? Of course you have, it’s a rite of passage of living in any big city. But somehow like most people you grit your teeth, understand that sooner or later the child will pipe down and that this is what babies do. That unfortunately is not how one female bus driver saw it on the number 57 Trimet bus in Hillsboro, Oregon this past Thursday evening.

According to reports things came to a head after the bus driver (a mother herself) announced over a loudspeaker (because of course you have to be louder than the baby…) that the mother needed to quiet her baby down. At the time of the announcement, one passenger, Jennifer Chapman and fellow passengers were alarmed and some what put off by the bus driver’s unusual request seeing as the child in their eyes was not crying particularly loud at the time (of course the bus driver was sure to change that in no time…).

Not convinced that the baby had sufficiently quieted down, the driver then asked the mother to alight the bus. Which by this time was getting quite dark. Flabbergasted, it is said Ms Chapman approached the bus driver and told her: ‘You can’t just kick a woman off the bus because her baby’s crying.’

To which the bus driver then replied: “If you don’t like it, you can get off the bus,”‘

That’s apparently when the whole bus, which is said to have been filled to the brim got off in protest once the mother and her child were asked to get out. Ms Chapman is said to have tried to cajole the mother who apparently spoke very little English to get back on the bus. The mother instead reiterated that her husband would drive by and pick her and her child up before disappearing around a bend.

At the time of press, Trimet spokeswoman, Mary Fetsch has acknowledged that the bus driver may have over stepped the mark. Do you suppose?