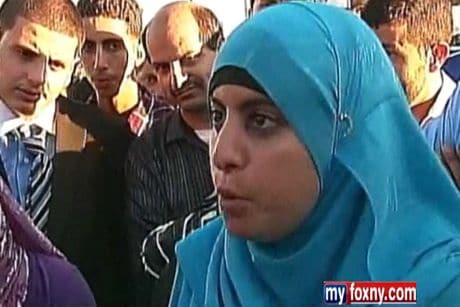 I’m not sure how you feel about women wearing headscarves but it seems a certain sector of the population is not particularly enchanted by the concept of a man or a woman’s right to dress as they please. That said, let’s delve into the psyche of 50 police officers rushing to arrest one women when she refused to take off her hijab because of apparent demands that an amusement park held, not to mention of the 15 or so people who were arrested alongside her? Bigotry in America or just a question of safety first…?

gothamist: Fifteen people were arrested at Rye Playland amusement park in Westchester County yesterday afternoon, and two charged with felony assault after a melee broke out when a park employee asked a Muslim woman to remove her headscarf before boarding a ride. The woman who attempted to ride the Dragon Rollercoaster, Haifa Ali, tells Patch that after she was told she couldn’t ride unless she removed her hijab, she and a group of other Muslim women went to ask for a refund. Then “someone grabbed her hijab…a park ranger wrestled another one of the women to the ground,” when “law enforcement began to converge on the group, hitting them with batons.” Another eyewitness not with the group says she heard one female police officer yell, “I don’t give a f*ck about your culture.”

Well that’s a mouthful of information but let’s see if we can dissect it all and come to an understanding of what’s really at stake.

First of one has to appreciate that the amusement park mandates that all loose items, headgear (ie including baseball caps), keys, electronic devices must be taken off and or stored in a locker when riding certain amusement rides for the sake of safety. What one should also be aware is those rules are open to interpretation when it comes to certain rides at the discretion of employees. And maybe that’s where the first problem began…

Fight Beaks Out at Rye Playland Over Muslim Headscarves: MyFoxNY.com

When Haifa Ali one of 3000 Muslims who had attended the park that day as part of holiday festivities (and hence of course the large presence of officers, but one has to wonder if the same amount of officers would have turned up if it was say a holiday for Baptists?) declined to take off her headscarf one of the park attendants then insisted she get off. She then proceeded to explain to the attendant that it was against her religious beliefs and observance, a fact underscored by the Muslim holiday. She also explained to the operator that the rule made no sense because she had been allowed to wear the hijab in the past at other amusement parks.The attendant in turn strenuously reiterated park policy of ‘no headgear’ on rides.

Miffed, Ali and a collective of women went to ask for a refund, but according to Ali, someone came up from behind one of the women and forced her hijab off. And that’s when to be rather quaint- ‘all hell broke loose…’

A Yonkers woman not with group would not give her name, but said she saw a female park ranger hit one of the women in the group repeatedly with a baton. The eyewitness said that the woman said, as she lay on the ground, something about her scarf being her religion and the park ranger yelled “I don’t give **** about your culture.”

Hmm- “I don’t give a fuck about your culture.” Does that then mean what is more important is enforcing rules even if it means having to occasionally crack someone’s head open? Which is to suggest