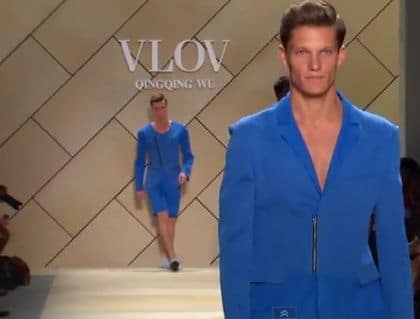 Last Monday afternoon saw the American debut of rising Chinese designer Qingqing Wu with his 2012 Spring/Summer collection, VLOV. Wu paraded his East-meets-West Men’s Wear collection at Mercedes-Benz Fashion Week at the Lincoln Center. Wu brings an austere but elegant touch to fashion, and his looks are unabashedly futuristic. While the range of the collection was somewhat limited, the clothes were striking and memorable.

Wu says that he was inspired by the letter V, for both its graphic and graceful simplicity. The simultaneously simple yet provocative design of the letter was emulated in the cut of his clothing. The silhouettes were clean and sharp. He extended this design idea to the largely monochromatic color palette. Though the show featured both suits and separates, the styling presented look after look all in various shades of gray and black, before allowing a bit of sun into the room with the advent of bright blue and alabaster white towards the end. The pieces were frequently made of luminescent material, and asymmetrical zippers and belts also made for eye-catching additions to the suit jackets.

Stylistically, the clothes felt a little unusual for current trends, but seemed to be looking with an eye to the future about where men’s fashion is going. Sometimes Wu’s style feels a bit asexual, which is to say that the cut of some of the jackets is very metro and similar to a woman’s style jacket. But there was a masculine energy to the clothing as well. There were occasional references to traditional Asian styles.

A lavender long-cut jacket that resembled a yukata (something like a male kimono) garnished with the signature zippers and paired with pants was a bold look, although it brought to mind the unfortunate connection to a bathrobe. There were several sly nods to the stereotypical Communist China stylistic look, playing into an overall theme of control and uniformity. In retrospect the collection felt very topical in an age where people all over the world are questioning the role of government in their lives (for good or for ill), and we are increasingly connected to one another through the same channels. The same phones, the same social networking sites, the same news outlets. Who’s to say fashion isn’t following a similar trajectory?

Playfully combing suits with bared men’s cleavage and above the knee shorts, Wu isn’t afraid to let his collection be a little provocative and sexy, while at the same time maintaining a sense of rigidity. The variation in ideas is slight, but at the end of the collection emerged bright blues and whites, which Wu described as representing hope. This suffusion of color into the modern, slightly authoritarian world Wu had given us previously made a fitting end to the narrative. Perhaps the future holds a little bit of spontaneity after all.