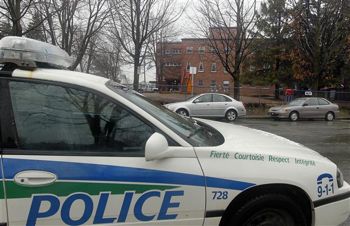 In a strange turn in the news reporting on bullying, Rock Dagenais, 26, the man who terrorized a Quebec elementary school this April, pled in a court hearing Monday guilty to weapons charges and forcible confinement, but claimed that the children and staff were never in danger; cause he only wanted to tell the kids that bullying was wrong.

Dagenais testified to a history of depression; according to the Cananda.com coverage, he never accepted his parents’ divorce; kids beat him up at school; his stepfather allegedly molested him.  Thus, on April 16th, he brought the .22 he bought legally, 100 rounds of ammunition (he does not recall why he brought so many), and a hunting knife in his sock so he could gain access to the hearts and minds of the children he picked at random, then use the weapons to kill himself after his speech.

Now, if this is true, it is clearly the logic of a person who does need help, but given the saturation of media of coverage on bullying (don’t get me wrong, completely legitimate coverage on bullying, for the most part), could this not be a wrenching confession but a shrewd ploy to touch the hearts and minds of the teacher this man terrorized and the judge that will sentence him?

Many of the teachers that were there on the day Dagenais gained entry into the school were present at the hearing, and their victim impact statements were read to the room.  Many attest to being traumatized by the incident; many do not feel safe returning to the school, and some cannot leave their own houses.  And then there are the children who have nightmares about the incident.

If this is at all a defense strategy, it is a savvy if cynical rhetorical use of ‘bullying’, since that topic shuts down conversations lately and immediately gains sympathy for anyone who claims mistreatment.  Dagenais only faces a three-year minimum sentence or a seven-year maximum; the way this sentencing plays out will determine how legally effective such a strategy is.