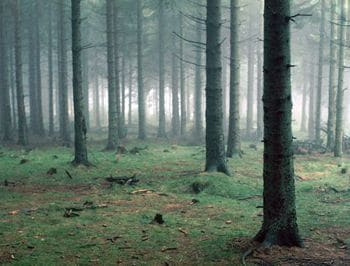 Here’s an interesting case that’s got many of us wondering how legitimate this boy’s story is and if it how it could possibly be so:

guardian.co.uk: He walked out of a German forest, speaking English and knowing only his first name. Police in Berlin are trying to unravel the mystery of a teenager who says he has no idea who he is or where he comes from.

The boy presented himself to the Berlin authorities last week saying all he knew was that his first name was Ray, he was probably 17 years old and he and his father had roamed through the woods for about five years.

“He speaks fluent English and very broken German,” the Berlin police spokesman Michael Maaß told the Guardian. The police have not yet determined if his accent is American, British or that of some other English-speaking nationality.

5 five years in the forest? Is that possible? And yet if this boy has no idea what his family name is, or where he came from, how is it that he came to the conclusion that he was in the forest for 5 years? Why not 2 years or 2 weeks or even 8 years, or perhaps not even half a day?

And then there is a question of him being able to only speak fluent English. How then did he and his father if this boy’s story is true arrive at the forest? Had they been visiting when they decided to stay? Could a boy and his father really have survived undedected all this time in the forest in a country with a population of 82 million people?

And most importantly why now? Or is this just part of some elaborate ruse?

He told youth workers that his father, whom he called Ryan, had died two weeks ago and he had buried him in a shallow grave covered with stones. The boy then walked north, following instructions his father had given him should anything happen to him.

The pair’s odyssey started after his mother, who he said was named Doreen, died. He says that he and his father never set up home but kept moving, staying in tents and huts in the woods.

It is not clear what they ate or how they survived the often harsh German winters. “He doesn’t show any signs of abuse and he is in good shape physically and psychologically,” Maaß said.

The boy says he cannot remember anything about where he lived before the five-year journey began. “We have nothing more to go on than what he told us. We don’t have any other clues as to his identity,” Maaß said.

The Berlin police have appealed for help to all European countries via Interpol to see if any outstanding cases of missing persons might match the boy’s description. They have not released a photograph of him at this stage.

He is currently in the care of Berlin’s youth services and they will decide what happens to him next if his identity is not established.

As much as this case is about a missing boy perhaps more it is about the notion of identity and how we relate to it, especially when a mysterious situation like this comes about which forces us to reconsider what we mean when ascribing someone their identity. After all is one’s identity a sum of  their profession, status in life, where he or she lives, what language they speak, what they think or feels, what we say about them or perhaps as in this riveting case sometimes potentially nothing more than what we will ourselves to be or deny as being…?