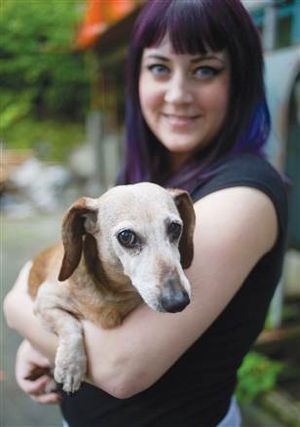 What a pet lover will do to save their dog…

Out of Anchorage, Alaska comes the tale of one woman’s devotion to her dachund, Fudge (what else would you call a skinny sausage dog?) who faced certain peril when a crouching bear in the backyard planned to make away with a delectable afternoon snack (yes Fudge…).

msnbc: Juneau resident Brooke Collins said she hit the bear Sunday night to save the life of her dachshund, Fudge. She said she discovered the bear crouched down, clutching Fudge in its paws and biting the back of the dog’s neck.

“It had her kind of like when they eat salmon,” Collins said Wednesday. “I was freaking out. I was screaming at it. My dog was screaming. I ran up to it … I just punched it right in the snout and it let go.”

Frankly I’d be freaking out too if a bear was thinking of taking my dog (I have a dalmation thank you very much…) off for dinner. Really bears should stick to other life forms when it comes to dinner. But then again this is Alaska and one has to wonder with all the deforestation and the encroaching of city dwellers the bear was only in its mind taking back what it thought was rightly theirs.

Collins said her boyfriend then scared the bear away. “I think it was more startled than anything,” she said.

Collins is happy to report that Fudge suffered no serious injury, but she did notice the bear returning to the neighborhood a couple of days later on trash day. But then again if you were a bear bereft of your natural habitat maybe you’d come out for a snoop on trash day too.

Isn’t it wonderful that some pet owners will risk life and limb for their pet? Personally I would have looked for a rubbish bin and offered the bear that, after that is I managed to run to the other side of the street…