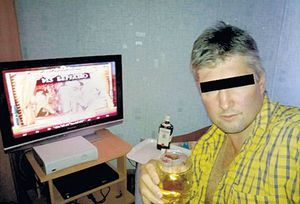 The good life will always be yours in Russia as long as you have a fistful of dollars rubles.

Kids I have to be honest if you mention the following two words: prison and Russia the only things that I have the courage to conjure up is the visage of a 9 month arctic wind brushing up your backside whilst you scrape your wooden spoon against your watery 5 star cabbage soup through dynamite proof iron bars. But apparently according to one ex Russian inmate, I’ve got it all wrong- in fact assuming you have spare cash to go (and of course we all know most inmates have plenty of cash to go around- cause that’s how inverse correlations with prison populations sort of works)  you in fact might just end up living the type of life reserved for most sleek shiny billboards.

independent.co.uk: …in an interview with Russian newspaper Moskovsky Komsomolets, the former prisoner explains in detail how he paid his way through his years in jail, where he says that anything can be bought for the right price.

“We had whatever we wanted. I even ate sushi every day,” he told the paper, to which he showed photographs that backed up his claims. “We had a great table laid on for us in the camp – sushi, champagne, whisky.”

Sushi, champagne, whisky? Kids this sounds like a casual evening after work to me. Really who would have thought Russian authorities were so amenable to the good life? Here I was thinking gulag national sing alongs in the dead of winter with a couple of stale pieces of rye bread that one of the guards would occasionally sneak into the chain gang cause his heart bled eternal compassion was de rigeur.

His allegations come just a month after photos were published of prisoners partying in a prison just outside Moscow.

The photos showed inmates dressed up in togas, sitting down to a lavish meal and having McDonald’s delivered to their cell. The governor of the prison was sacked after the photos appeared on the internet. Both incidents show how corruption, endemic in Russia, has also engrained itself in the Russian prison system.

Andrei claimed he was allowed, for a fee, to live in the hotel used for conjugal visits, which is on the camp’s grounds, and leave whenever he wanted so long as he returned at night. “I put up a bar, home cinema and brought back whoever I wanted,” he said.

And leave whenever he wanted as long as he returned by night? Kids, this reminds me of one of those grounding episodes I used to have as a kid. Except mine never came with makeshift hotels and home cinemas with chilled buckets of Dom Perignon.

But seriously how can you expect a cash abiding Russian prisoner to go out for a stroll and be back before the crack of dawn? That’s hardly egalitarian if you ask me…after all if the guards can come and go, surely those cash abiding prisoners should be able to as well. Right?

He says he once went on holiday to Italy for the weekend without the camp noticing.

Well what do I know?

The morale of the lesson? As Russia buys into the concept of cash will set our country free especially those of us much more privileged and richer than you it seems the construct of unabashed corruption free market reform is making its way in every vestige of society, including prison.

Of course I do have one nagging question, can the Russian prison experience of the good life be had on credit too, or is that something prison guards have yet too finesse with their Russian American Express colleagues?

Shouldn’t you be filthy rich next time you check in a Russian jail cell?