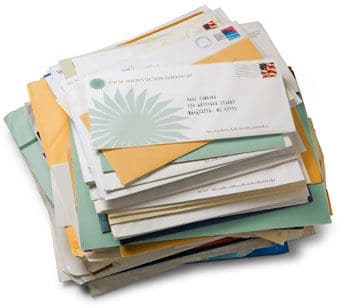 Steve Tasker never got around to delivering 31,000 packages and letters, but he did intend to once he sobered up.  After mass reports of undelivered mail, his home was found brimming with three years worth of parcels, some opened, most waiting to be delivered.

Telelgraph: In the property were 15,253 postal packets, some on top of the fridge and some of them dating back to March 2007. A further 15,831 items were found in the garden shed or behind it, in a bin. About 1,000 packets were water damaged. A total of 43 greetings card-type letters had been opened, between last August and September.

A repeat offender, the Telelgraph reports that previously, “He was given 32 weeks in jail, suspended for a year, with 12 months supervision and alcohol treatment and the Thinking Skills programme.

“He told officers he knew what he had done in opening mail was wrong, but he had probably been drunk at the time and had no money.”

Well not that much money. It was reported that in all likelihood he had pocketed one 18 year old recipient’s birthday money of 200 pounds.

But to truly understand what Steve Tasker’s day involved, there is this:

On the day he was observed, he didn’t start on his walk until noon at the earliest, finished about 2pm and had left more than 300 packets undelivered.

He later admitted he had left the Post Office at about 9am and had then done some shopping, gone home for his breakfast, had some cider, been to the bookies and was drunk.

One can probably presume he didn’t too well at the bookies.

But Tasker it was told had mitigating circumstances:

The hearing was told Tasker, an asthmatic, had a “tough time” at home, looking after his wife and daughter who are both disabled, almost single-handedly – which may have been why he drank too much.

Fortunately for Mr Tasker, the judge decided to suspend his sentence.

At least Tasker’s intentions were good.  He went to bed each night intending to deliver all those old letters and such tomorrow, but alas, tomorrow never came.

Such it seems are the affairs of certain postmen….