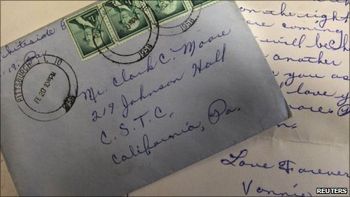 A love letter addressed to Clark C Moore in 1958 finally surfaced this month in a Pennsylvanian university mailroom.

The letter sent sent by Vonnie, whom Mr Moore whom he later went on to marry and then divorce may have never made it to Mr Moore because of the fact at one point he had changed his name to Muhammad Siddeeq, which made finding the original intended recipient a nearly almost task.

The letter may have never been traced to Muhammad Siddeeq had it not been for a friend who saw a TV report about it.

To date Mr Siddeeq has yet to have read the letter (which is to say he is eagerly awaiting to read it) which was affectionately signed by his then girlfriend, ‘love forever Vonnie,’ whom he later went on to marry and have 4 children before divorcing.

At the time the pair were students, with Mr Siddeeq studying science.

Romance was different then – with no computers, letter writing was the only way to stay in touch and remains more romantic than emails, he said.

That said, he is keen to read the letter which the university is now forwarding along to him, although given the circumstances of his later divorce he has mixed feelings about reading it.

Reflecting he offered: it was “a testament of the sincerity, interest and innocence of that time”.

How ironic after all this time that Mr Siddeeq should be receiving the letter. That said, one can’t help but wonder had he received the letter when it was originally sent he may have held other feelings for Vonnie, and that in some way they may have still been together. But perhaps fate tempted that he should read it now. How bitter sweet after all…