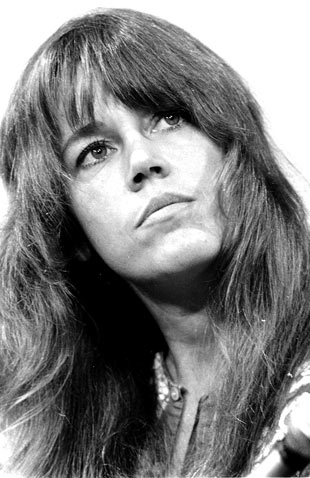 Jane Fonda cannot bury her politico past (really, she doesn’t want to, anyway).  Poor Jane has become a scapegoat for the star-as-revolutionary type, her presence overshadowing the difficult situations involved every time her image becomes attached to an issue.  Her own father dubbed her “the instant cause girl”; Jean-Luc Godard even criticized her sympathetic expression that says, oh yes, I know, I know…

The latest issue: Fonda claims that QVC cancelled her Saturday appearance to promote her new book, Prime Time, due to her involvement protesting the Vietnam war.

She writes on her blog, JaneFonda.com, “The network said they got a lot of calls yesterday criticizing me for my opposition to the Vietnam War and threatening to boycott the show if I was allowed to appear. I am, to say the least, deeply disappointed that QVC caved to this kind of insane pressure by some well funded and organized political extremist groups. And that they did it without talking to me first.”

She goes on: “Bottom line, this has gone on far too long, this spreading of lies about me! None of it is true. NONE OF IT! I love my country. I have never done anything to hurt my country or the men and women who have fought and continue to fight for us. Do understand what the far right stands to gain by continuing with these myths.”

QVC responded to Fonda’s claims, admitting that they only cancelled her appearance due to routine scheduling conflicts.

This comes as no surprise.  Leftists will continue to love Jane because she gives a token face to popular left wing opinion; conservatives will hate her because she espouses ‘left wing rhetoric’; Jane herself will use the gimmick occasion to promote her book that  “can help make life better, easier and more fulfilling.”