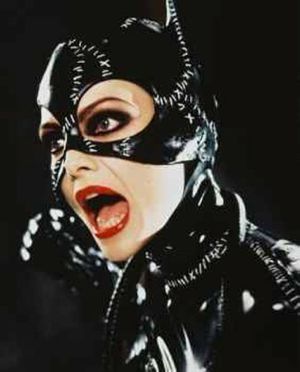 It was reported that a woman dressed in a latex cat suit, gloves and helmet remained hidden in the bushes of French politician, Christian Honore‘s home, as he returned home one evening. There to assassinate him, she lined her shotgun several times but at the last minute found she did not have the resolve to kill him.

During this time, sensing a strange presence in the yard, Mr Honore decided to call the police. When the police finally arrived they came across the woman, who they described as a kind of a catwoman crouching in the bushes with a shotgun.  It was only after Mr Honore came to the garden that he recognized his would be assassinator. It was his wife, Laurence Honore.

The Telegraph reports that Mr. Honore had been a little paranoid since he was mugged and had his car torched in 2009. At the time he speculated it was the actions of his political opponents , but as it turned out it was the result of concerted efforts by his wife, who had hatched a series of plans to murder her husband, pursuant to anti climatic events in her husband’s political career.

One plan included seduced her husband’s bodyguard, a former spy, to kill her husband.  But in the end, after he pocketed 6000 euro, money she left for him in a brown paper bag at a bar he pleaded with her to not go forward with the plan. Something she tacitly agreed to at the time despite the fact her money was not returned to her.

With respect to Laurence Honore’s latest effort at murder and her ostensibly bizarre choice of costume, one could wonder if this was mandated as some sort of guise to separate herself from her role as wife and that of some cultural mythical figure that one could presuppose has the capacity to act out political thriller plots?

The allure of such a guise should in fact not be so readily discounted.

Sean Young, of Blade Runner and Dune fame, was so convinced she was perfect for the role in Batman Returns that she dressed up in her own latex suit, leapt over the casting couch and hissed to Tim Burton, “I am Catwoman.  Here me roar.”  Burton was disturbed.

Catwoman unlocks a femme fatale that is dark and chthonic.  If Heath Ledger lost his mind playing the Joker, it’s no surprise that this woman got so into her role.