Got Milk? How about a bitch of a wife or a girlfriend?

The war of the sexes seems to be heating up with the latest offering courtesy of the California Milk Processor’s Board which had hit up on the idea of using the dichotomy of how men and women relate to each when it came time to selling their milk.

The initial ads portrayed confused men holding cartons of milk with the following accompanying tags: “I’m sorry I listened to what you said and NOT what you meant,” and ” I apologize for not reading between the RIGHT lines.’

Designed to let consumers know that milk can reduce PMS symptons the campaign had the unintended consequences of upsetting women who believe they have been unfairly portrayed. On one level one could argue there is certainly degrees of humor about the ads, but on another one has to wonder why the portrayal of men being browbeaten into submission has caused such a rancour?

(here are the ads above and below which have caused an uproar). 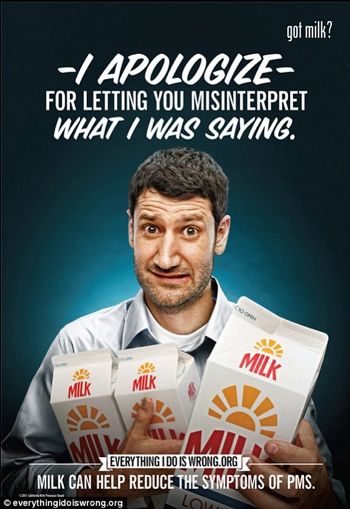 Is that to say women can only be perceived as angels and not the intimidating presence that they sometimes can be, especially when their bodies are subjected to hormonal over loads that can make the most well intentioned women a handful to deal with? Or is that to say, men also feel uncomfortable been portrayed anything but warriors with barely a hint of consternation- which ostensibly represents the majority of most advertising campaigns?

For the time being the ads have now been changed (see below) to now reflect that men can also be wrong. But haven’t they always been wrong in a society that has subjected them to loftier standards than women, higher standards to adhere to? After all, all a woman has to do to attain femininity is look the part (according to society), where as a man is told he has to go out and conquer the world and only then can he lay claim to his masculinity.

So going forward I propose the following:

There- the milk should start selling off the shelves in no time.