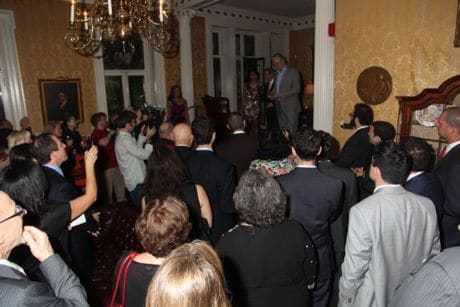 who was understandably distracted. He was given his award early so that he could skedaddle and go warm up for How To Succeed In Business (Without Really Trying).  He won a Tony for it after all, it’s understandable that he’d want to get back to work.  Still, he was polite, and spoke warmly about the night.

“It’s nice to be accepted into the community,” said Larroquette. “It’s my first time here. Especially in a place built to reflect the appreciation of good theatre.” He’s been itching to do live theatre for a while, but the ‘downside’ of a healthy TV career has made it difficult-to-impossible for him to find the time for it before now.

After a bit more mingling, the crowd shuffled into the Great Hall for some opening banter from Master of Ceremonies Julie Chang, of Fox 5 News. Chang was gracious, funny and not afraid of roasting Justin Beiber. (More power to you, Ms. Chang.) On the challenges of getting a taxi at 5 PM, she said, “If you saw a little Asian girl making out with  a cabbie,  you know the sacrifices I made to be here for you.”

It was announced that would-be recipient the Honorable Christine Quinn (Speaker on the NY City Council) was unable to attend. Like Laroquette, she was called away by actual work. (I have mixed feelings about this. On the one hand, kudos for being so good at something that you’re being recognized for it. On the other, stopping to smell the roses wouldn’t kill ya.) 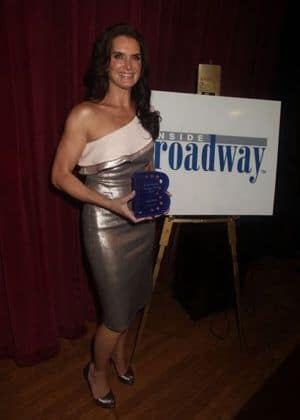 Brooke Shields (about to start a run as Morticia in The Addams Family) was on hand to receive he r award—and she reflected on why Inside Broadway is so important. “I grew up loving [theatre], watching people give their all to it. I can’t imagine not growing up having that as a part of your life. Theatre is a gift. It’s personal. It’s an outlet. It’s inspirational. It’s crucial to keep funding for the arts alive… All kids deserve the opportunity to be a part of that.”

The true highlight  of the night, however, came with Karen Ziemba. A Tony Award winner (and former Broadway Beacon winner as well), she sang a handful of numbers that lit up the stage. The joy she infused with every song was infectious, and her voice was powerful and pure. This was a true Broadway Star: someone who loves what she does and is very, very good at it.

The final award of the night was given to Real Estate magnate Ofer Yardeni. While not a veteran of the stage by any stretch, Yardeni nevertheless found and fulfilled his own American Dream: an immigrant from Israel, Ofer has conducted $3 Billion in transactions over the course of his career. He recognized the importance of that passion, that hunger for opportunity, and the need to instill it in the next generation.

What can you do to help?