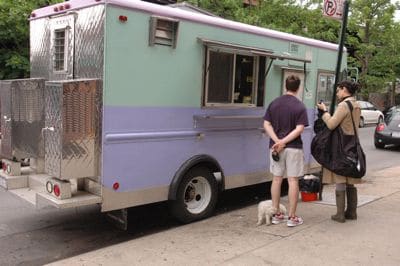 When I first moved to Williamsburg back in 2002, you’d be hard pressed to find the occasional bodega that would make you the gratuitous ham and cheese sandwich. What you did find though was lots of drug peddling (although by then it was on the way out), lot of Puertoricans and Dominicans having summer bbq’s on the sidewalk  (although if you walk up and down Havemeyer st today you can now find early street morning vendors selling ‘caliente appetizers’) and the occasional hipster slobbered drunk on the sidewalk- something you can still find.

Since then, with the advent of a finicky palette, mainstream America moving to the hood, high rise buildings, restauranteurs have migrated to offering kitch selections- from BBQ Korean, Southern comfort food and rib shack houses. But now it’s gone further, call it a situation of carving up the dollar, ingenious businessmen taking it to the next level or simply the natural flow of people eating on the go, (but if they are eating on the go- you can bet it ain’t hot dogs) and the general lackadaisical clientele tending to a free wheeling environment. 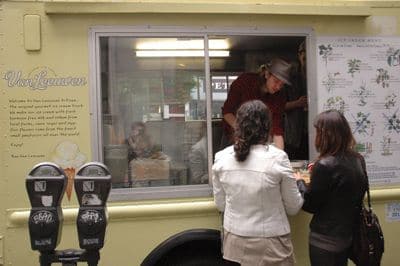 These days you can find food trucks parked all around the ‘hood’, from traditional Mexican (Tacos Morales, Endless Summer, etc.) Middle Eastern, Polish and in the summer gourmet ice creams. One of my current favs is the novelty faux food truck on Metropolitan at Lorimer. More of a restaurant posing as than a food truck, I won’t hold their lack of authentically mobile food sales against them since they offer really yummy diner favorites.

In fact I’m  betting it’ll only be a matter of time before you have some hipsters carting their own movable gourmet pantry, and with an anything goes audience it’s probably going to be this summer’s hit sensation. In fact don’t be surprised come the end of summer if you’ve plonked some cash for a lobster crepe or some other savory novelty carting itself up and down Bedford Ave (but then again this par for the course in France, or at least in it’s high density tourist locales)

Call it natural evolution of the modern day palette, a reaction to the times or simply the simmering point of a vibrant eclectic drawn to each other. Bon apetit. 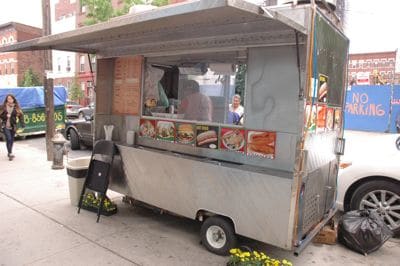