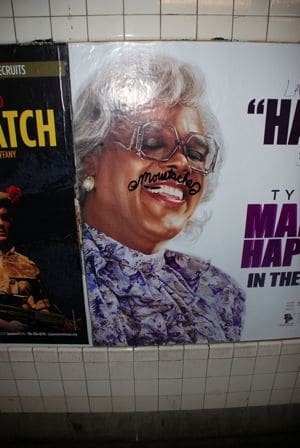 Let’s consider the graffiti artist “Moustache.” He’s known for defiling subway ads (in an awesome way) by taking a sharpie to major ad campaigns.  This guy is attacking the status quo within a society that is constantly inundated with visual media garble. Instead of subscribing to the limitations of artist and patron, he keeps the true nature of graffiti street art by making a mockery of that which we take for granted.  As you walk down the tunnels of the subway, suddenly an ad for Tyler Perry’s latest movie becomes an interesting showpiece for a renegade with a sharpie. Madea never looked better.

It’s this playful dynamism that ignites the ingenuity seen in so many pieces. For example, street signs provide a perfect playground for textual deviancy. Visual puns delight us on all sorts of public signs meant for control.  The spirit of the street artist trickster makes a mockery of systematic public signals of control. 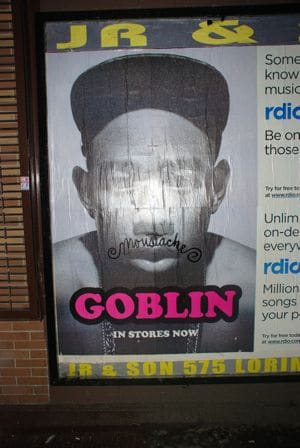 To be fair, there comes a time when the ne’er-do-well sacrifices street cred for space and accepts a commission for the coveted walls and time to paint in peace, even if that means he/she has to paint Chromeo for Bushmills. And a few days later, the hurried tags of “Dickchicken” and “Coolcat” that start to appear in and around the Colossal ad, or the Adult Swim mural act as visual verification of the undying attempts of the kid with a can of spray paint. The artist will always create, whether it be legal, illegal, commissioned, or stolen. So all you artists out there, Vans ads or vandalism: choose your poison. 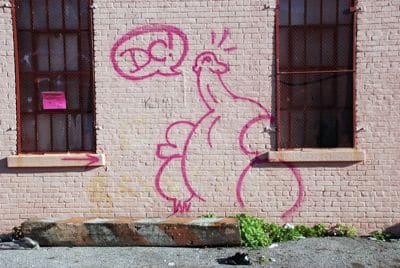 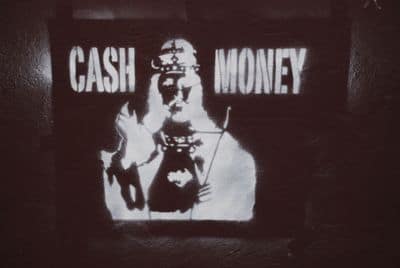 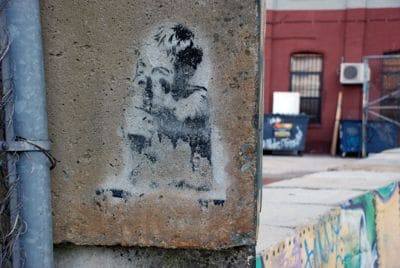 Journalist pretending to board up Santa Monica bus/s becomes most hated...