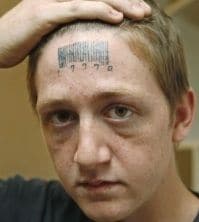 I’m going to share something with you, and I want you to think about it for a minute. Okay? Stetson Johnson, aged 18, was beaten, tied up with duct tape, electrocuted and tattooed. Twice. This was not the act of one person, but four. Four human beings, two men and two women, decided this was a good use of their time. These people are idiots.

Johnson, who is learning-disabled, had the phrase ‘I like little boys’ tattooed on his chest, and ‘Rapest’ on his forehead.  This is not a typ0. The wrongly-spelled crime against humanity was carried out by morons who apparently thought Johnson was trying to have sex with one of them. There is no evidence of this.

His attackers put him in a car and drove him to Eagle Lake, where they beat him with a baseball bat. At some level, this goes from kneejerk overreaction to meditated assault. They got into a car, and on the drive to Del City, at no point did anyone think to say, “We’re not really doing this, are we?”

Think about this for a minute. To force another person into sex is one of the worst violations imaginable. It can be argued that it’s a worse crime than outright killing someone. So how thick do you have to be, how blind, how moronic a waste of DNA must you be to think that violating someone else’s body is appropriate punishment?

Suppose for a moment that Stetson Johnson did try to force himself on a person. There is no evidence that he did, but since I’m playing devil’s advocate I might as well go full out. Stetson Johnson hypothetically tries to sexually assault someone, someone with friends standing right there, and those friends decide that beating him half to death and defacing his body feel like the right things to do.

“I was screaming. It was hurting,”  said Stetson. “After they kicked me in the face I said, ‘Oh my god, they’re going to kill me.”  Johnson regained consciousness two hours later, wandered to a mobile home community and someone phoned the police. He spent a week in hospital.

His family is understandably shocked and frightened.  His mother, Lucy Ford, announced that she and her son are planning to move. “He feels that it’s unsafe for him here. He can’t sleep at night,” said Ford. “I just can’t believe that people would be so mean. He’s 18 years old. He has his whole life before him. And he almost lost it?”

In a week that’s already seen one monster pay the ultimate price for his crimes, the question is begged: how do you punish someone for something like this? Prison? Counseling? Sterilization? Sexual predators and registered pedophiles are required by law to announce when they’re moving to a new neighborhood.  How would this introduction sound?

“Hi. I’m just going door to door; I’m your new neighbor. Anyway, one night my friends and I saw this guy with the mental capacity of a child who we assumed was trying to rape us, so we kicked the shit out of him, tasered his genitals, kidnapped him, drove him to a lake, beat him with a baseball bat ‘til his skull cracked and tattooed his chest and forehead. Badly. In that order.”

Now, the real disturbing thought: These ‘people’ that beat Stetson half to death? They’re human beings.  They have something in common on the genetic level with you. With me. I can’t quite wrap my head around this fact. Maybe I just don’t want to, because frankly, they make me ashamed to be in the same species as them.

If anyone feels like making an argument for the human race, now’s an excellent time. Post a link to something good, someone we can be proud of, anything that can balance out this kind of garbage. Because it’s not enough that we do it. People have to know about it so we can goddamned learn something.