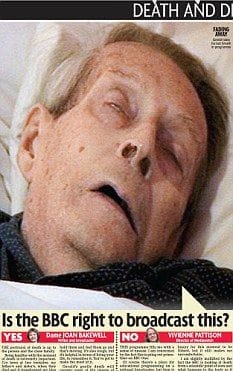 Have BBC gone too far?

What counts for proprietary, what counts for fair game and what counts for off limits? These are some of the questions being asked pursuant to the green light given by BBC executives in deciding to air the dying breaths of a dying man, simply named Gerald.

dailymail.co.uk: The harrowing moment a dying man draws his final breath will be shown in a BBC documentary this evening.

BBC bosses are facing huge controversy over the decision to show the death of Gerald, whose full name has not been released.

Gerald’s death, detailed in images published in the Daily Mirror this morning, will be shown as part of documentary series titled ‘Inside the Human Body’ which will be broadcast at 9pm.

The cancer stricken former soldier was filmed for the documentary over the final two months of his life before his death in January.

Immediately we can disclose the man is dead, that death was imminent and one supposes the man in question had given his blessing to this program as one suspects to perhaps educate the public to his debilitating illness.

Dr Peter Saunders, campaign director of Care Not Killing, said: ‘Some aspects of life are so personal and private that even if individuals give their consent to be broadcast, we are wiser to keep them private.

And what about BBC- what’s their position?

However a BBC spokesman defended the programme saying: ‘Death is an important part of the human experience, and showing Gerald’s death is integral to understanding what happens to the body when it is no longer able to function properly.

‘The BBC does not shy away from difficult subjects like this, but presents them in a sensitive and appropriate manner.’

All of which portends what does one judge to be healthy and in good taste for public consumption? If one supposes the public has been sufficiently numbed by the thousands of action flick killings they get to watch on TV, who’s to say, just because this time death is for real then it’s best to turn our heads away? After all- if we can watch it as an ‘act’, why not watch it as reality, especially when the aim is to educate as opposed to titillate? Assuming this program is not  in some way geared to titillate by virtue of the theme it has chosen to present.