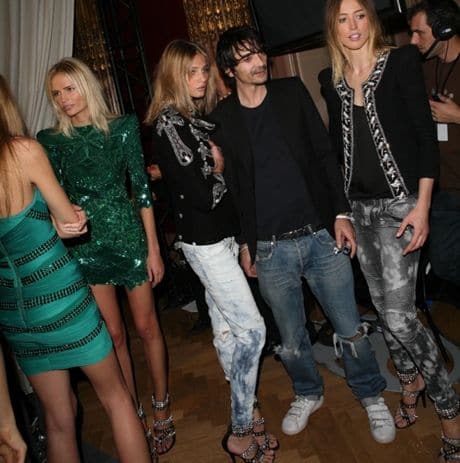 It looks like there is more drama unfolding behind the scenes in the fashion world than there is usually in front of the catwalks that we are accustomed to. The latest casualty- stalwart designer Christophe Decarnin, who single handedly took the dowdy Balmain label and turned it into a chic must have body armor. That said somewhere along the road to prominence the heady and diabolical designer lost his verve and rather than capitulating to speculation and disarray the line has decided to part with its talent. Which brings into question how significant is talent really these days when corporate chieftains and public relations campaigns are now calling the shots?

nytimes:Balmain expects to name a new creative director next week to replace Christophe Decarnin, who has left the house, and the successor is likely to come from the current design team.

Well at least the house is savvy enough to keep the dogma that has resurrected Balmain intact even if the individual who was able to bring the vision to roost has somehow had to deal with personal demons.

Despite, or perhaps because of, a phenomenal run at Balmain, where he made ripped jeans and $5,000 motorcycle jackets seem the coolest thing since, well, Bardot and Brando, Mr. Decarnin hit some kind of personal impasse and lost control of the label. According to a number of people close to the house, Mr. Decarnin, under stress for some time, was absent from Balmain in the weeks before the show, perhaps since the first of the year. He was not at the show. And he has communicated little with the company’s chief executive, according to people close to the house.

$5000 ripped jeans? Now that’s quite an accomplishment as this author stares as his tattered jeans at this very moment. But when we talk about stress what type of stress are we talking about? The stress being experienced by the designer or the stress being experienced by the house who has had to recently come up with clever stories as to their missing darling? After all, a label is so often the sum of its designer’s presence as opposed to the actual garment that eventually makes its way to the boulevards…

huffingtonpost: Decarnin certainly increased the label’s popularity during his five-year tenure there, but questions were asked when he missed the final bow at Balmain’s show as part of Paris Fashion Week in March.

At the time, Alain Hivelin, Balmain’s owner, explained to the Telegraph that Decarnin was “tired, after working on the collection. No, he’s NOT retired. He’s just tired. He didn’t go to bed until 5 a.m. He’s not here, he’s resting.”

Other outlets, like Hint Mag, claimed that Decarnin was in a mental hospital following a nervous breakdown three months ago — “Decarnin is said to have disappeared one day in mid-January.

Mental hospital? Well at least in Balmain’s case there was no public outburst or contagion that brought undue attention to the label. But in an industry that has become increasingly micro managed by publicists trying to exact a preferred image, a faltering designer/genius where they may have been affectionately tolerated in the past is dealt with in the most discreet terms. Take a cold shower or get out of the bathhouse might be a more exact description of what is going on here…

$5000 jeans or $50 000 public relations campaigns? What are we really buying anyway? Perhaps this is what inevitably got to the designer and rather than perhaps nurturing him the way he nurtured the label, and in the wake of the Galliano fiasco, we have all discovered in this new brave world – creative shortfalls/dissent or wayward behavior will no longer be tolerated. Anyway, I’m about $4017 short on those designer jeans, how about you?

CHRISTOPHER DECARNIN- PARIS’ NEXT FASHION DESIGNER ON THE SKIDS.