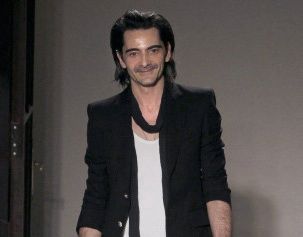 How hard can it be to be a fashion designer?

Pursuant to the public meltdown of Christian Dior designer John Galliano, rumors are starting to fly that another prominent French designer is not doing so well either. Who you wonder? Well, his name is Christophe Decarnin, and yesterday he missed the bows at the Balmain show, for whom he designs. Why you wonder? Well according to believe, he was either too tired or still committed at a loony bin for  a mental breakdown.

HuffingtonPost:  Designer Christophe Decarnin left many questions unanswered after missing his bow at the end of the Balmain show in Paris on Thursday.

Alain Hivelin, Balmain’s owner, explained to the Telegraph that Decarnin was “tired, after working on the collection. No, he’s NOT retired. He’s just tired. He didn’t go to bed until 5 a.m. He’s not here, he’s resting.”

Didn’t go to bed, hmm? But let’s ask another question, where exactly is that bed? And how did Balmain’s head designer end up there?

WWD writes: “The designer was absent under doctor’s orders, after having recently been released from the hospital, where he was said to have been treated for depression.

But just in case that solves it for you Hint mag insist he is still checked in at the local loony bin.

Hint Mag claims that the designer is still at a mental hospital, following a nervous breakdown two months ago — “Decarnin is said to have disappeared one day in mid-January. Soon after, according to our source, it was announced to employees that he would not be returning.” Hint also writes that Decarnin did not work on the fall collection.

All of which begs, why the mystery, the conflicting reports, the lack of full disclosure, and what is it about being a fashion designer or creative that can make someone mad (or can one just wonder that creatives are more prone to going mad or at least more cognizant of their madness, which to some degree every living person is). And after we have asked all these questions we ought to ask one more question, why has been fallible  such a sudden taboo in the fashion world- which is to say, at the end of the day, how much is tied up to an image of the line at even the expense of the designer themselves?

John Galliano promises you life will be better once he checks into Rehab.