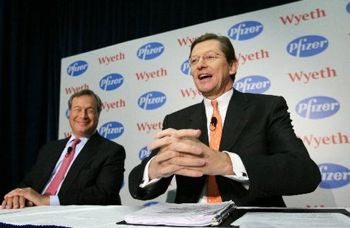 They’ve lost a few battles, but they’ll forge on to win the war– eventually sowing their toxic rheumatoid arthritis drug across the land to harvest an estimated $2 billion dollars a year; such is life for pharmaceutical giant Pfizer.

Four people died and four people developed infections in the group receiving the drug, tofacitinib, while there were no serious adverse events in the group given a placebo, according to the abstract of the study being presented at the European League Against Rheumatism meeting in London.

“It’s a big overreaction,” said David Maris, an analyst with CLSA in New York, in a telephone interview today. Investors “saw four deaths and flipped out, and as they start to digest this a little more they’ll realize it doesn’t appear to be as bad as people thought.”

Maybe time will heal this wound, and maybe Pfizer will prop up one of the deceased, toss on some shades, play some music and get the cadaver dancing in Weekend at Pfizers Bernies fashion– bringing the death toll down to three.

I’m sure fine-print laden waivers were signed–erasing Pfizer’s liability–and the deceased volunteered themselves for experimentation due to desperation doing their honorable bit to make sure another multinational comes up with a miracle cure and a handsome buck.

canadianbusiness; Pfizer has said more than 1,000 patients have taken tofacitinib during clinical trials, and it said late Thursday that overall death rate for patients in those studies is similar to what has been observed in other biologic treatments for rheumatoid arthritis.

Nevertheless, one has to wonder the culpability of Pfizer here, or can one argue that the incidence of death observed is to be expected as we are talking about a malignant disease? Something patients ought to bear given their willful submission to experimental testing?