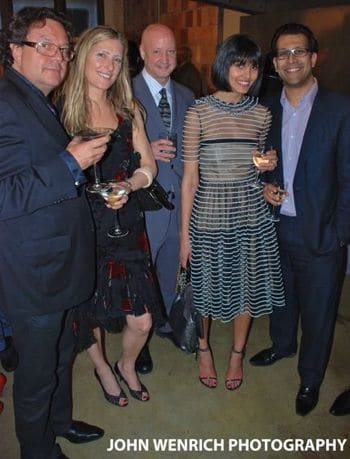 Honoree, speaker and filmmaker Todd Haynes mingled during the cocktail hour, even giving us enough time to ask a few small questions with a dramatic range of variety. Todd Haynes is one of the only openly homosexual filmmakers and directors in the industry and when he first started working he received a grant from the New York Foundation of the Arts, leading to his kick off in the directing world. He is thrilled to recognize not only changes of attitude toward gay persons in the film industry, but in other sectors of entertainment, lifestyle and business as well. He considers this to be attributed because of more discussions pertaining towards global war, a disastrous economy as well as the hotly contested theme of abortion. Finally, a native Portland, Oregon resident, Haynes will be spending his summer (which mind you is an absolutely beautiful season in Oregon) in the woods, mountains and creeks… finally leaving New York City for a vacation after a year of tirelessly working on the HBO series Mildred Peirce.

With a few famous faces in the art world and some reality television stars, there were also fabulously dressed and beautiful people intermeshed with the talented. Noticed immediately upon arrival was a group of strikingly tall blonds in floor length gowns that were perhaps more the wise, never leaving the open bar till the call “dinner is served.” And that was our cue to leave, as we had already gorged on the catered sushi, sirloin mini burgers, and finished with plenty champagne mojitos.