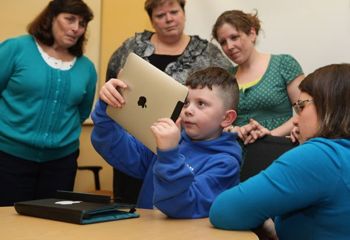 As America’s youth continue to be outclassed by their foreign peers across the academic board, school administrators continue to look for innovative ways to close the gap. In a shock to all, the L.L. Bean and lobster obsessed people of Maine have decided to take it upon themselves to right this sinking ship.

LATimes: A school district in Maine is proposing to spend about $200,000 on Apple iPad 2s to get the devices into the hands of about 300 kindergartners.

Desperate times call for desperate measures, and while the times are certainly desperate, the proposed measures of Supt. Morrill are anything but, but of course, some disagree.

Sue Millard, an Auburn mother to students in the fourth grade and in high school said she isn’t sure kindergartners are old enough to make the most of the iPads.

“I understand you have to keep up with technology, but I think a 5-year-old is a little too young to understand,” Millard told the AP.

Could Mrs. Milliard’s lack of enthusiasm for this kindergarten initiative be founded upon her lack of regard for this age bracket, given the current grade level of her kids? I’m not sure she has much credibility here given that she would probably like to see her tax dollars allocated towards the betterment of her own children, but let’s not get hung up on one sourpuss.

The prolific versatility of the Ipad will expose America’s youth to innovative–and more importantly engaging–educational tools. Let’s take a break from the coloring books and block-building and allow these snot-nosed sponges to challenge themselves intellectually.

Or will this tablet-teacher overstimulate and add fuel to the American youth’s attention deficit fire?

Only time will tell, but in the meantime, observe below as a two-year-old (three years younger than the Maine kindergarteners) expertly navigates the Ipad.