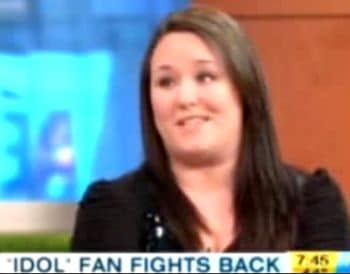 Should Ashley Kauffman go on a diet?

Ashley Kauffman and her friends thought they were going to get a bird’s eye of their favorite show- ‘American Idol,‘ but apparently staff at the show weren’t too thrilled when Ashley and her girlfriend’s decided to sit in the front row.  Of course, this being ‘show business,’ Ashley and her friends were promptly escorted back to back row- where of course they ‘properly’ belong. Or do they?

jezebel: Ashley Kauffman and five of her girlfriends were excited when they recieved tickets to a taping of their favorite show. But the excitement turned into embarrassment when they arrived at the show when American Idol employees suggested that the 19-year-old was too heavy to sit in the front row of the hit Fox show.

When she first entered the seating area, Kauffman claims a woman who worked on the show told her she “was too big and too heavy” to sit in the front of the audience. Still, she and her friends made their way to the front, given that they had arrived early hoping to do just that. Once they arrived at the front of the arena, Kauffman recalled a man who “looked me up and down and said ‘Oh, it makes sense why you’re not with the skinny girls — you guys are in the back row.'”

And as you all know the back row is a great place to sit when you want a/ to get a bird’s eye view b/ when you want to hide the horrible coffee stain on your dress c/ when you’re not really interested in the show d/ tend to have a tendency to be rude and say offensive things.

American Idol released an official statement on the matter:

“The seats were in two groups of three — she and her remaining party were seated just four rows behind her friends, directly in camera shot, in some of the best seats in the house.

Granted the free tickets don’t guarantee a first row placement, but one would think they would grant you a level of tolerance.

That said, Ashley Kauffman wants a public apology, because in her words: “Most of all, I dont want this to happen to anybody else.”

Wouldn’t life just be easier if Ashley went on a diet? Or would it?