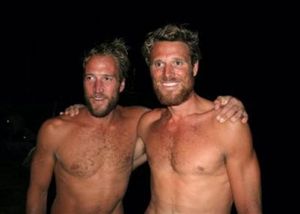 Archaelogists have found a male body dating between 2900-2500 said to be buried for a way normally reserved for women during the Corded Ware culture in the copper age.

telegraphco.uk: The skeleton was found in a Prague suburb in the Czech Republic with its head pointing eastwards and surrounded by domestic jugs, rituals only previously seen in female graves.

“From history and ethnology, we know that people from this period took funeral rites very seriously so it is highly unlikely that this positioning was a mistake,” said lead archaeologist Kamila Remisova Vesinova.

“Far more likely is that he was a man with a different sexual orientation, homosexual or transsexual,” she added.

The men would be buried alongside weapons, hammers and flint knives as well as several portions of food and drink to accompany them to the other side.

Women would be buried with necklaces made from teeth, pets, and copper earrings, as well as jugs and an egg-shaped pot placed near the feet.

And of course we can only imagine all the designer necklaces, subscription to the Equinox spinning classes and bangles sitting by this deceased man’s body.

“What we see here doesn’t add up to traditional Corded Ware cultural norms. The grave in Terronska Street in Prague 6 is interred on its left side with the head facing the West. An oval, egg-shaped container usually associated with female burials was also found at the feet of the skeleton. None of the objects that usually accompany male burials Â such as weapons, stone battle axes and flint knives Â were found in the grave.”

One day when it comes time to be buried be sure to request your own cache of made for man to man goodies, just in case someone comes across your dead body 3000 years from now and is tries to work out your sexuality.