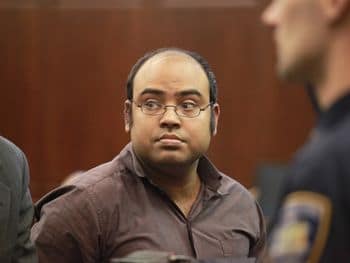 Tonight, Mohammed Azam will not be going your way.

In one of the most bizarre and troubling tales to come to light with respect to cabbies misbehaving comes the tale of Mohammed Azam, who in his zest to avoid a possible $30 late return fee of his NYC cab essentially decided to run over his potential passengers rather than taking them to a destination he deemed too far out of his way. Buckle up as we take a ‘joy ride’ with Mohammed…

dnainfo.com: Mohammed Azam, 27, picked up four friends at 53rd Street and Sixth Avenue, and they asked to go to the Bronx. The cabbie refused to drive there and told them to get out after just a few blocks. Prosecutors said Azam was worried that if he took the fares all the way to the Bronx, he would be late taking the cab back and would be fined.

After threatening to call the police when the men refused to get out of the cab, Azam drove them to the Manhattan North police station, prosecutors said.

“Fine, call the police,” one of the passengers said when the argument began with Azam, according to prosecutors. “We’ll call them too.”

A lieutenant inside the police station at Manhattan North told Azam he had to take the men to the Bronx.

But did Mohammed listen to the lieutenant? What do you think?

But before they could get back into the cab, Azam reversed and then accelerated forward, plowing into two of the men who were in front of the car, prosecutors said.

The two men were allegedly tossed onto the hood, and tumbled off as Azam sped 30 yards ahead.

One of them, Anthony Loreto, 22, had a fractured skull and was put into a medically-induced coma at the hospital. The other was badly injured.

A third was injured because his hand was on the door handle and he was allegedly dragged backwards when Azam made a sharp reverse. The lucky fourth man had decided to take a different cab and was not injured in the melee.

And how did this all make Mohammed feel? I for one would have driven to the local 7 and 11 and got myself a big fat free slurpie because my nerves would have been fried.

After striking the men, Azam procceeded to the cab depot and to his home in Jackson Heights, Queens, the DA said at his criminal court arraignment Monday.

“He simply drove away, went home and acted like nothing had happened,” Assistant District Attorney Greg SanGermano said.

Why inconvenience yourself with things and people that get in the way of you possibly incurring a $30 fine? Better to always do what you know best. At least the taxi has a few nice dents in it that Mohammed can brag to friends too, after all, what cabbie doesn’ t have a few war stories to share with other cabbies?

Azam was charged with assault, reckless endangerment and leaving the scene of the accident, and was ordered held on $100,000 bail, which his lawyer, Joshua Benjamin, said he was unlikely to be able to post.

One day when Mohammed is cruising down TImes Square he will see a a big billboard poster of what appears to be TV show about the immigrant experience suddenly gone wrong and without quite understanding why he will get out of his cab and use the tears to wipe the blood stains away.