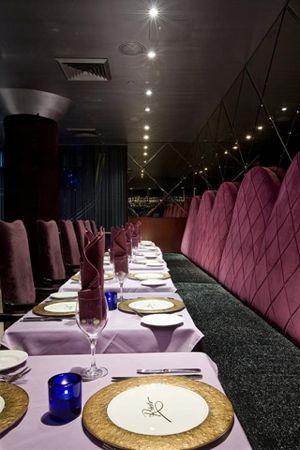 Man is driven by his appetites. These physical urges we may or may not have names for that just come on their own. While these urges don’t necessarily overlap, it somehow makes sense that an establishment would work to satisfy one craving while sharpening another. I am of course writing about Robert’s Restaurant, which shares an address with Scores.

Tastefully decorated (complete w/ Barbie dolls in lewd positions behind the bar), Scores and Robert’s cater to a particular crowd: namely, straight men with disposable income. Having rarely frequented a strip club in the past (a 21st birthday, a bachelor party), I don’t recall the food served there as being particularly memorable. Why bother, right? You don’t go to a ‘gentleman’s club’ for the food.  It’s therefore baffling and an extremely welcome surprise to report that the food at Robert’s is nothing short of excellent.

Will Savarese, executive chef, has been with Robert’s for two years now, since renovations in early 2009. (Robert’s is named for its owner, Bob Gans). Savarese has worked at such haute establishments as Le Cote Basque, Le Cirque and Aureole. Will Savarese is a man that talks with his hands and cares about what he does. This is a man that loves food.

“Scores contacted me eight years ago,” says Savarese. “They called me again two years ago. I told them I’d be happy to [work with them], if I could do what I wanted to do.”

Apparently, what he wanted was to create a four-star restaurant with a constantly evolving menu of expertly-tailored delights… ‘cause that’s what he did. Robert’s has its own steak-aging room, a top of the line kitchen and enough variety on the menu to satisfy any palette.

For seafood lovers, the Herb & Caper-Crusted Wild Salmon was fresh and left me wanting more. The Tuna a la Plancha was moist and spiced to perfection with a nice hummus (I think) finish. The Maryland Crab Cake is nothing short of delicious.

The steak at Robert’s is deeply satisfying. They age their own beef, and Savarese puts a lot of love into his work. His sliders (small hamburgers) were almost as juicy and every bit as flavorful.

My personal favorite of the night, however, was the Moroccan Spiced Lamb Chop. Holy god. The meat barely hangs on the bone, it’s juicy, it’s tender, it’s paired perfectly with watercress and lemon, and it’s as mouthwatering as the other half of the establishment’s appeal.  I am of course referring to the strippers.

There’s Sheila, from Russia, who’s a former tennis pro. We spoke about her ambitions (she wants to study finance and fashion) until she was called to dance on the main stage. 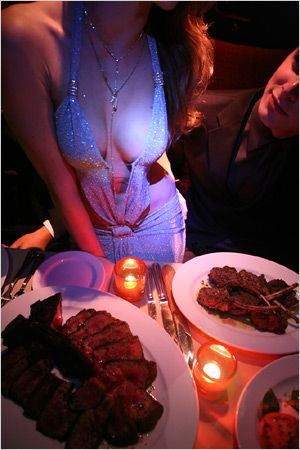