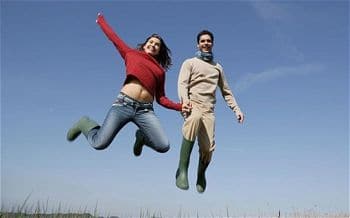 It’s time to get happy.

Researchers have concluded that maintaining a positive attitude and being happy generally lead to people living longer.

telegraph.co.uk: The review of more than 160 studies found the evidence connecting an upbeat outlook to a healthier life was even stronger than that linking obesity to reduced longevity.

It backed previous studies that found a “glass half full” approach was good for your health.

Which on the surface intuitively sounds about right, as happy people are less prone to stick knives in their hearts or razor blades against their wrists. That said, the question remains, how does one achieve happiness?

The general conclusion from each type of study is that your subjective wellbeing, that is, feeling positive about your life, not stressed out, not depressed, contributes to both longevity and better health among healthy populations.

…”Happiness is no magic bullet, but the evidence is clear and compelling that it changes your odds of getting disease or dying young.”

All which seems to suggest happiness is much about a state of mind than necessarily acquiring things that avid Western doctrine dictates (which from this author’s personal experience only leads to more exasperation and anxiety). Which forces a bigger question, how does one train oneself to feel happy about one’s lot even in the throws of great disadvantage and peril that is part of the human condition. Perhaps the story of the nuns below sheds some clues…

In another study, based on 180 catholic nuns, researchers found those who wrote positive autobiographies in their early 20s tended to outlive those who wrote more negative accounts of their young lives.

Animals who lived in stressful conditions, such as crowded cages, had weaker immune systems and a higher susceptibility to heart disease.

Compelling stuff, but the question remains, how does one compel themselves to feel happy and choose to find positive thoughts even in the most perverse conditions- an axiom that portends that real happiness has nothing to do with one’s external dispositions but their internal ones, or rather appropriating them inwards. So much for that new sports car right?