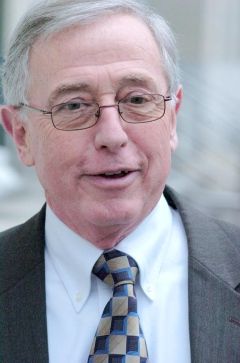 Are you a judge that has been bought out by profit detention centers?

On the surface, it makes sense, the more offenders a for profit detention center gets to house- the more money it gets to make. Which then puts the question how does one ensure robust profit, after all, one can not just hope that juvenile offenders drop in out of thin air. But one if encouraged can make sure when they do turn up to court, instead of getting the benefit of the doubt or other terms of rehabilitation or punishment are sent directly to jail. And how does one ensure this practice? One bribes the judge of course. Think we are making this up?  Follow us this way, as we head into the dizzy reality of Luzerne County ex-Judge Mark Ciavarella.

npr : A former Pennsylvania juvenile court judge was convicted Friday of racketeering in a case that accused him of sending youth offenders to for-profit detention centers in exchange for millions of dollars in illicit payments from the builder and owner of the lockups.

Luzerne County ex-Judge Mark Ciavarella, 61, left the bench in disgrace two years ago after prosecutors charged him with engineering one of the biggest courtroom frauds in U.S. history by using juvenile delinquents as pawns in a plot to get rich.

Are you shaking your head in disbelief. The mother in the video below is also shaking her head in disbelief, because pursuant to ex Judge Mark Ciavarella handing her son a steep prison sentence for a minor drugs possession, her son hung himself out of despair and humiliation. The type of consequence one is loathe to wonder if Mr Ciavarella ever bore conscience to as he sat there, day after day, squandering young people’s lives – because he could and he was being paid to do so.

A federal jury in Scranton returned a mixed verdict, convicting Ciavarella of 12 counts, including racketeering and conspiracy, and acquitting him of 27 counts, including extortion. The guilty verdicts related to nearly $1 million that the builder paid to the judges.

Ciavarella was expressionless as the verdicts were being read. Prosecutors called him a flight risk and asked that he be held pending sentencing, but he was allowed to remain free. He is likely to get a prison sentence of more than 12 years, according to prosecutors.

But if Mark Ciavarella is guilty of conspiracy, what about the entities that paid him off? And perhaps we should wonder to what extent having a private pay as you go system benefits society, when ultimately it behooves them to have half of America theoretically locked up if it could return a stellar year to investors? Are we the only ones who see a moral issue, or just a plain conflict of best collective interest? Next thing we know, we’ll be sent to jail for spitting on the sidewalk, or even writing this article, but perhaps that’s just a question of time or payoff…

The judge, known for his harsh and autocratic courtroom demeanor, filled the beds of the private lockups with children as young as 10. The Pennsylvania Supreme Court dismissed thousands of juvenile convictions issued by Ciavarella, saying he ran his courtroom with “complete disregard for the constitutional rights of the juveniles,” including the right to legal counsel and the right to intelligently enter a plea.

One has to wonder whether the state also bears some moral culpability for having allowed this deranged system of affairs to continue for the length that it did?

Which begs the ultimate question, what good is the court system when it is more tainted and corrupted than the purported criminals it aims to rehabilitate or in this case take to the cleaners?